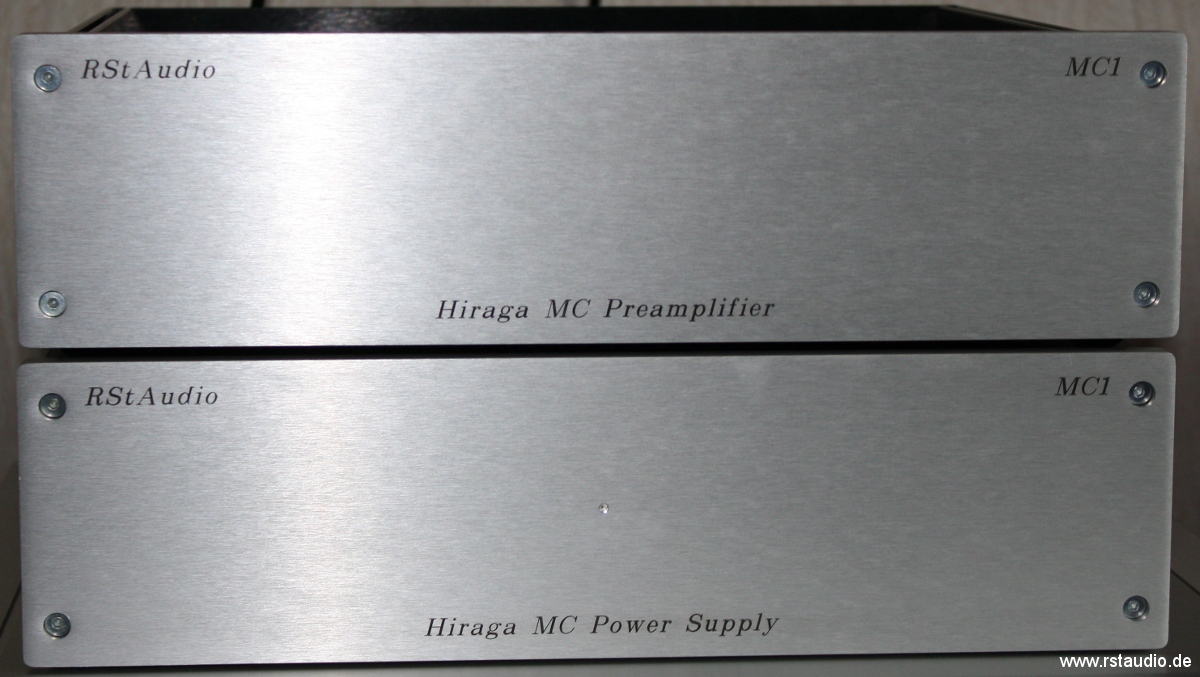 In February 2010 at the AAA (Analogue Audio Association) regulars’ table we had the wish to have a Hiraga MC prepreamplifier available. Since a long time I was very interested in this design and therefore no one has to asked me to start a development. I had enough open DIY projects at that time, but this design is so simple that it takes not much time to design a PCB.

Schematic of the Hiraga MC Preamplifier

I want to start with the original schematic of Jean Hiraga from the L’Audiophile, which you can find for example at the homepage of Claudio Bonavolta.

The bipolar transistors of the original schematic are no longer in production and very hard to buy, but in the internet you find enough recommendations for a replacement. At the homepage from above a TBC560 from Toshiba is stated. A long year user mentioned to me in an email that the BC560C is not the optimal choice – his recommendations are the 2SA1038 and 2SA1085 (thanks Anton), which are also pnp bipolar transistors from Toshiba. I had enough 2SA1085 available and therefore I decided to use these types in my clone.

The capacitor at the output must be the highest quality for an audio coupling cap and therefore I bought Mundorf MCap Supreme silver/gold. For the resistors I use the non-magnetic Vishay-Dale CMF-55-143 and for the power supply capacitors direct at the preamp circuit Panasonic FC.

I matched 2 pairs out of 50 parts with the measurement of the current gain hfe. The pairs are assembled – as you can easily see on the photo above – thermic coupled on the PCB. Thereto I coated the flat surface of one transistor with thermal conductance paste and connected both with a heat shrink tube together. During a first fast verification with a laboratory power supply I was able to set the offset of both inputs to a couple of µV with an Agilent measurement device.

Most owners make use of batteries for the power supply of the Hiraga prepre. I don’t want to do that at the beginning and therefore I decided to take a shunt regulator. It is the first time that I use such a power supply topology and my experience of the behaviour of such a regulator is limited to Spice simulations.

I want to use a simple and complete discrete construction of the regulator and therefore I took the Simple Shunt Regulator with Constant Current Source.

As allways the power supply is build up as a dual mono design. After the transformers, the bridge rectifiers – which are build with discrete Ultrafast Soft Recovery diodes – and the first electrolytic capacitors (4× 22000µF) you find 10mA current sources. The Hiraga prepre dissipates 1mA at the positive and 2mA at the negative supply voltage and therefore the current sources are designed above the recommendations for the dimensioning in shunt regulators – arround two times of the current of the consumer load.

At the output of the regulator there are 3300µF Panasonic FC electrolytic capacitors in use. Afterwards in the enclosure of the MC stage you find additional 4× 100000µF electrolytic capacitors assisted with 10µF Wima capacitors. On the board of the Hiraga prepre itself there are 12× 2200µF Panasonic FC electrolytics connected to the power supply. Finally the overall capacity after the regulator is nominal 439640µF – at the end this is not accordance with J. Hiraga, but I think enough for a first implementation. Furthermore the shunt regulator is placed in a separate enclosure and can easily be replaced with batteries. 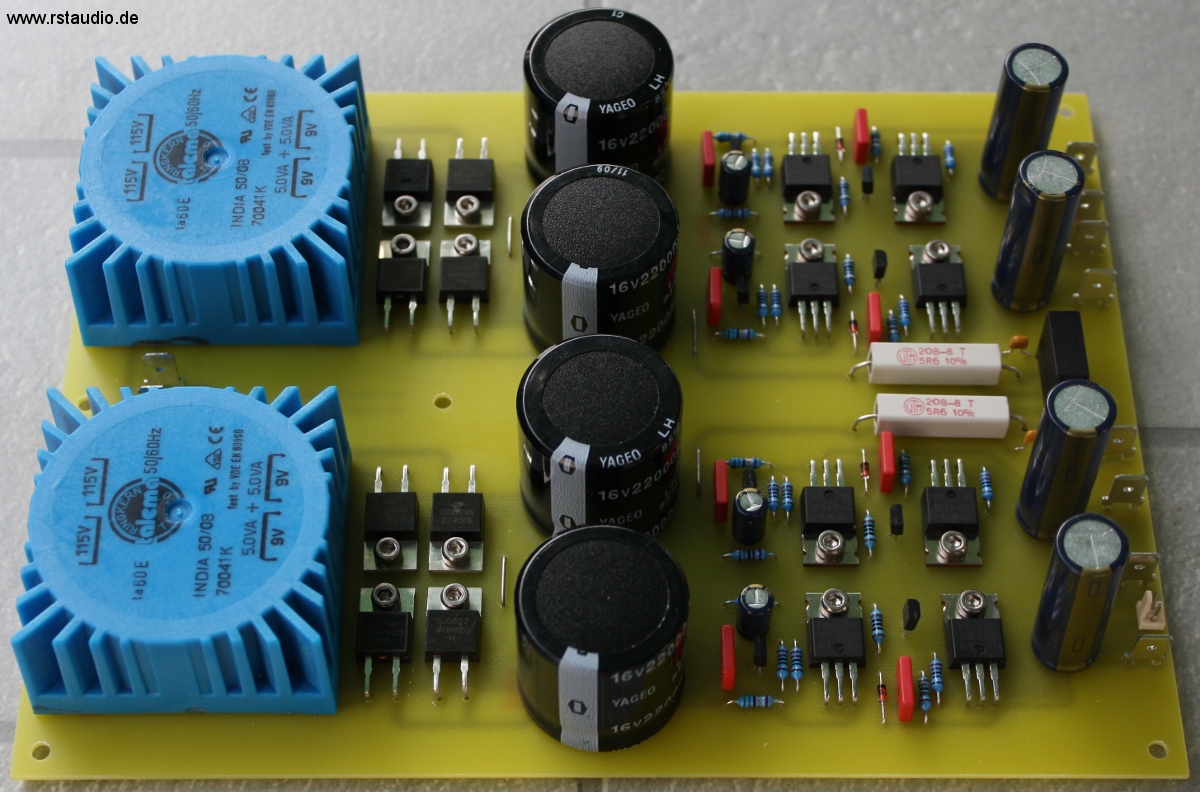 A fundamental aspect for the decision against the use of batteries are my experiences with the Pass XOno. This phono preamp needs a very long time to reach a stable operating point and as a consequence I never switch this preamp off – exactly this I want to do also with the Hiraga prepre. The power consumption is so low that there is no need to switch it off and therefore I need a power supply.

Assembly of the Enclosures

As I described above the complete Hiraga prepre is placed in two enclosures – one for the preamp and one for the power supply. I bought the enclosures from HI-FI 2000. Out of their portfolio I decided to use the Galaxy Maggiorato with a dimension of 330mm × 280mm × 80mm (W×D×H) with a 10mm front panel.

On the picture below you can see the audio enclosure from the from – the front plate is not mounted. The PCB’s with the 100mF electrolytic capacitors and the 10µF MKP4 are mounted on both side frames. In front of the rear panel the Hiraga MC preamp is fixed. 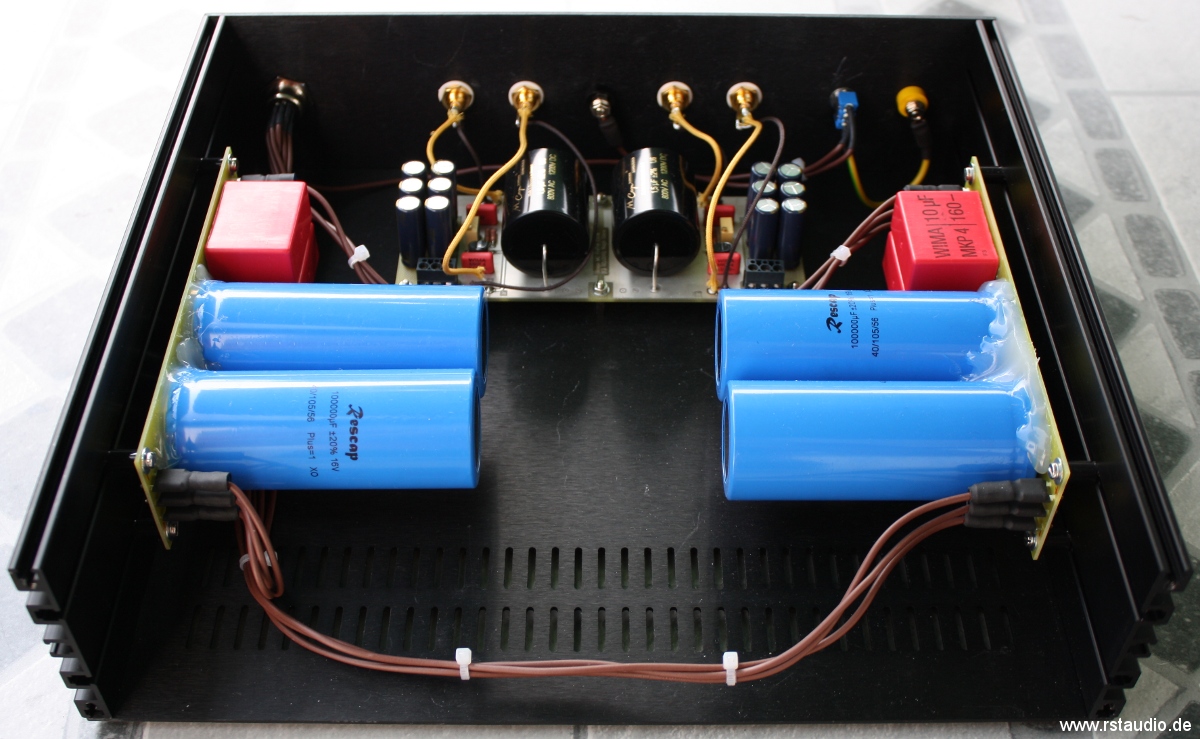 Enclosure with the Hiraga MC Preamplifier

Below you see the shunt regulator in it’s enclosure. 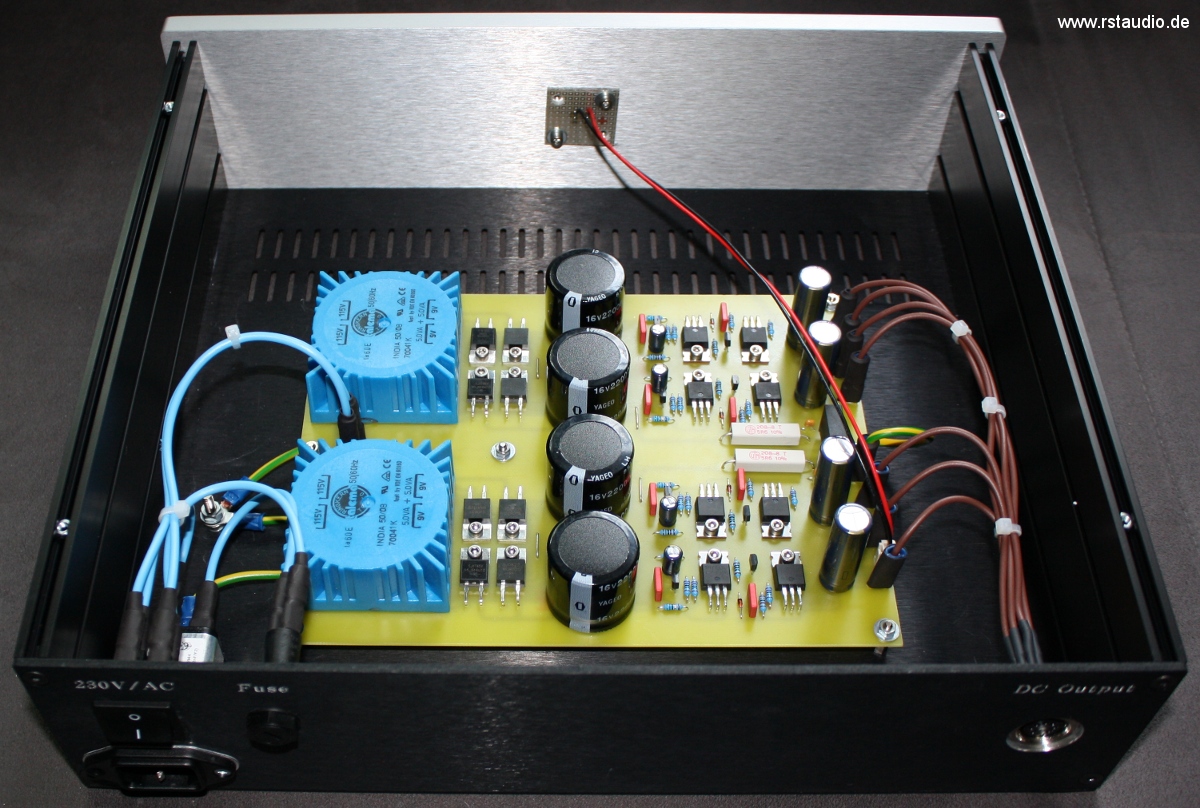 At the power supply enclosure the 230V/AC input connector, a switch and a fuse is mounted on the left side. On the right side the 7 pole DIN connector for the DC power supply is fixed. 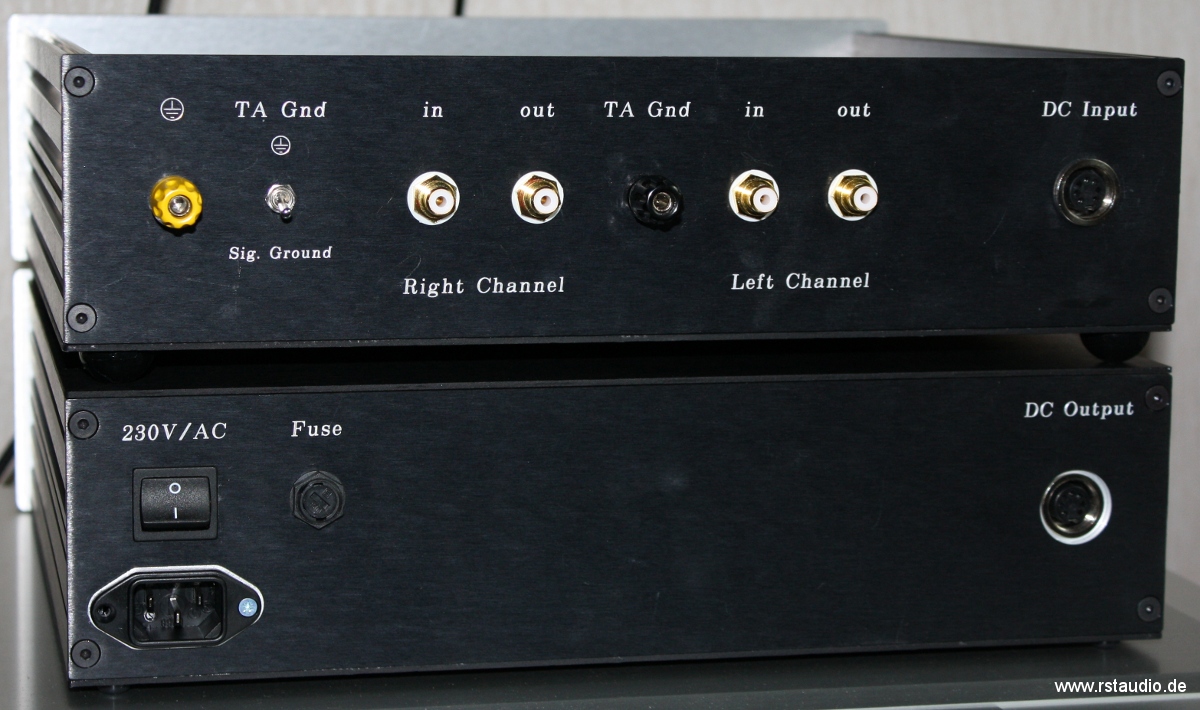 Rear Panel of the Hiraga MC and Power Supply