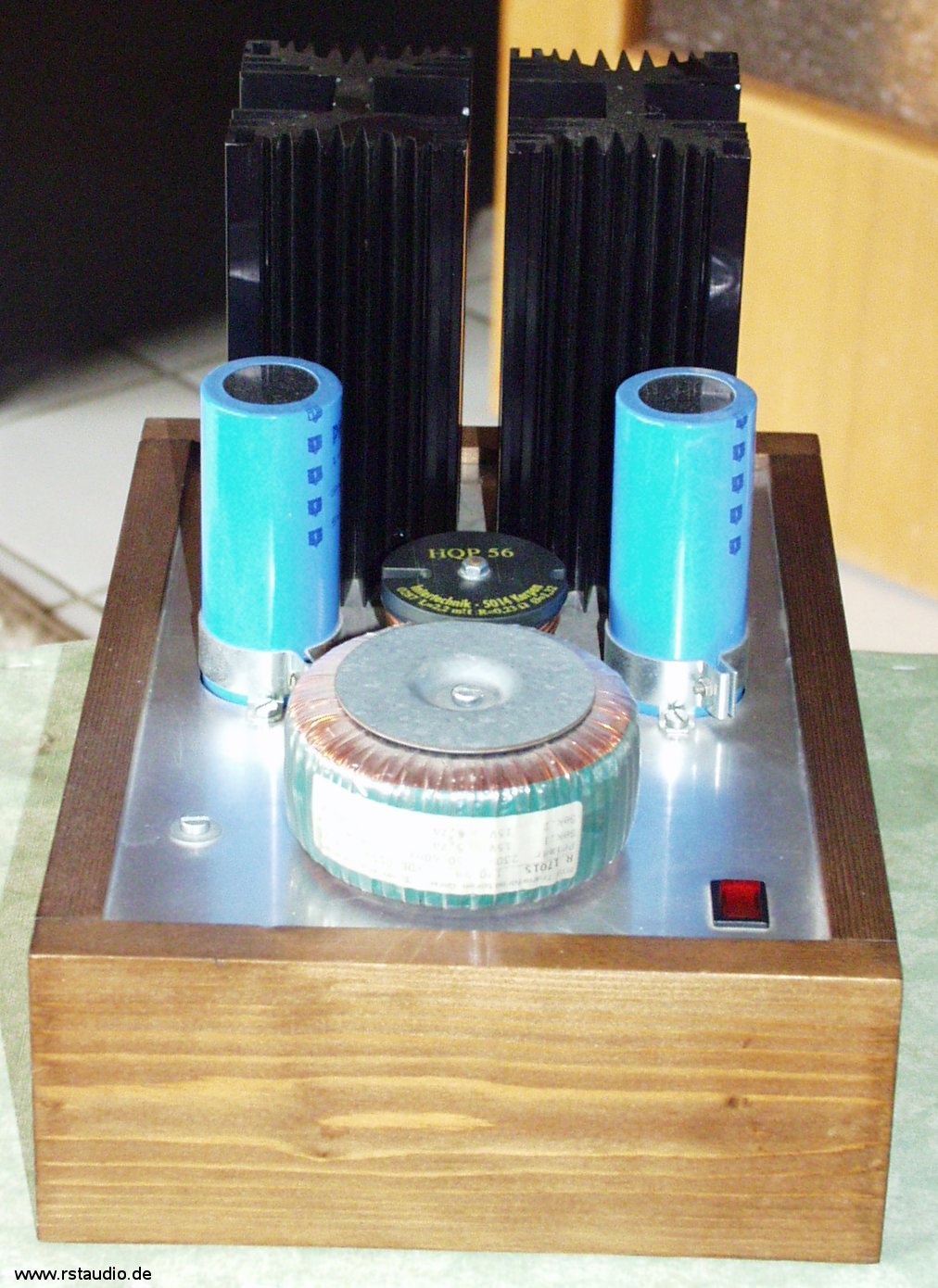 Description of the Project

In 1995/96 I read in a news group a description of a small simple amplifier which should work very nicely together with the 57th Quads. I send an email to the author Sheldon Stokes and he gave me the informations about some articles from Nelson Pass. At that time the possibilities of the internet were not as today and it tooks me nearly two month to get copies of that articles from the American DIY audio magazine The Audio Amateur. Today you can download them from passdiy.com :

I couldn’t believe that this amazing simple amplifiers should work with my Quads, but I was so fascinating from the simplicity that I have to build a pair. With this tiny amplifiers I ran my stacked Quads since many years (before I used a modified Quad 405) and only in 2004 I had the idea to change to a bigger amp.

You find the schematic of my Zen amp here.

If I had to build this little amps once more I would keep – regarding to my actual knowledge – more notice on the quality of the coupling caps (MKP4, Panasonic FC, Black Gate, …). There are also some updates available for this design (see on passdiy). Nevertheless I’m fascinated from this little beast and my new design has also a single ended class A concept (see above). 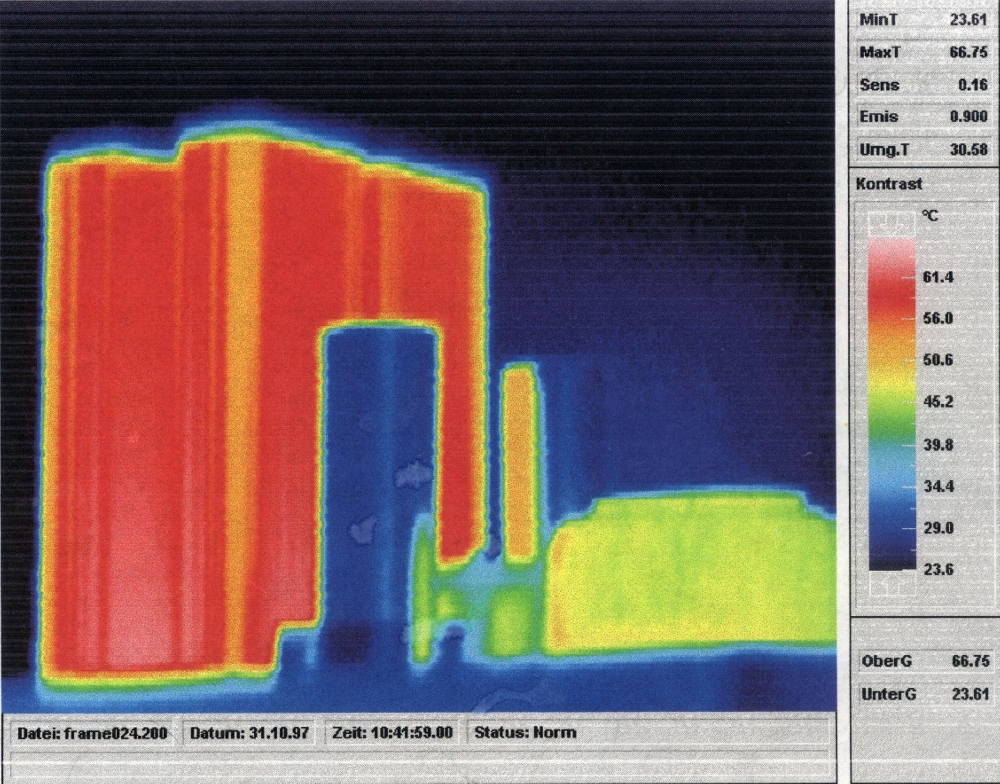 Temperature of the Son of Zen

The Zen was my first contact with a single ended class A amplifier and I never expect such a high temperature on the cooling device. This is the reason why I gave the amp the name Energy Destroyer. On the picture above you see what I’m talking about

I have to thank my father, he made this nice case in a design of a classic tube based amplifier. 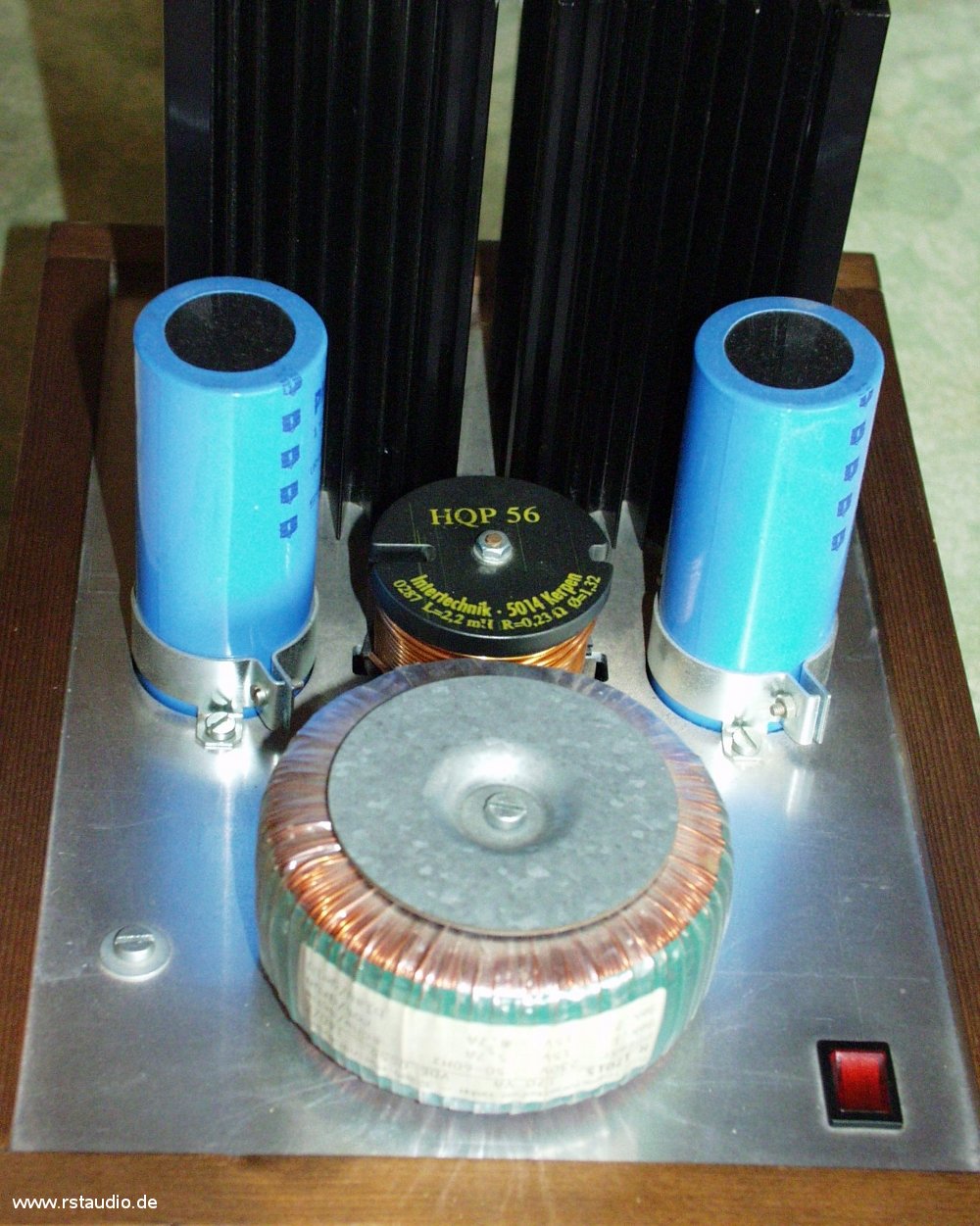 Power Supply of the Son of Zen (Top View)

You can see above the power supply of the amp – a transformer, a bridge rectifier and a C-L-C filter. 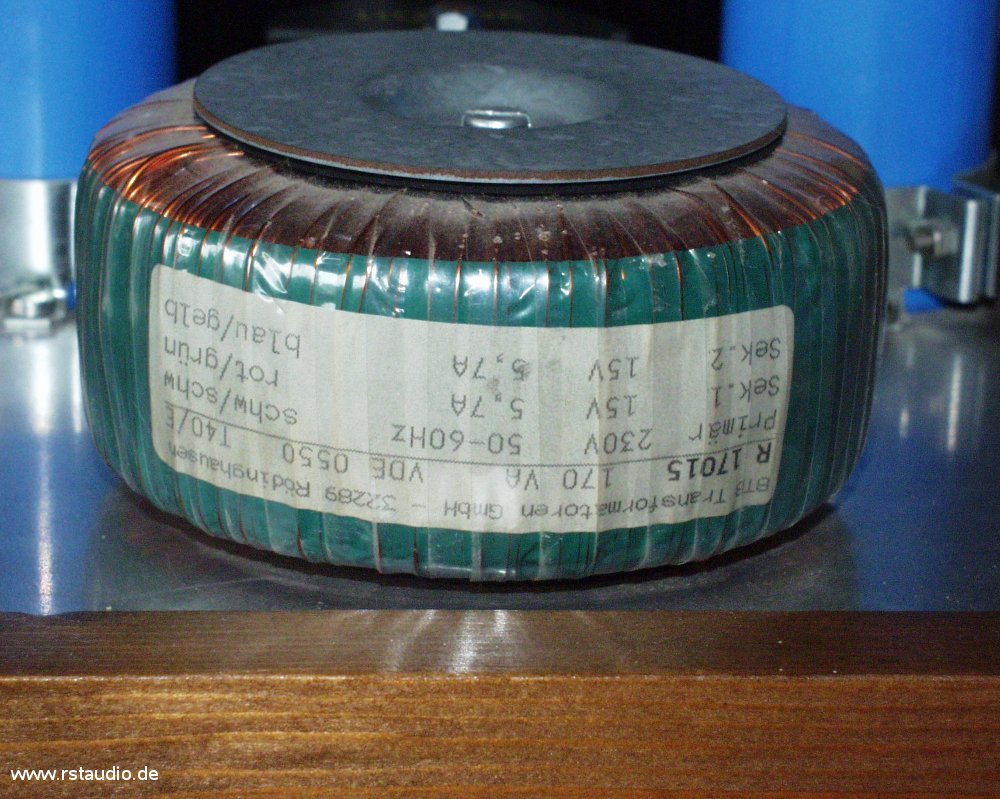 Transformator of the Son of Zen

The 2x15V / 5.7A transformer, the secondary windings are in series. 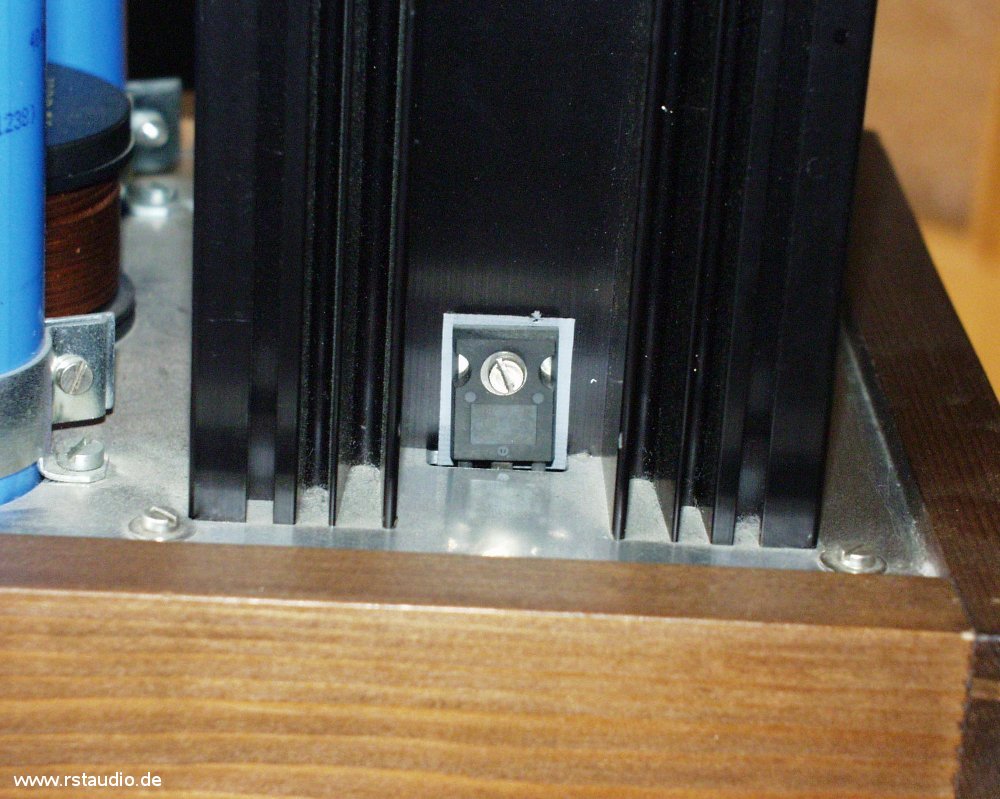 Power-MOSFET of the Son of Zen

You see here how the power MOSFET’s are included. They are directly soldered on the PCB and coming out on top of the case where there are screwed with the cooling device. 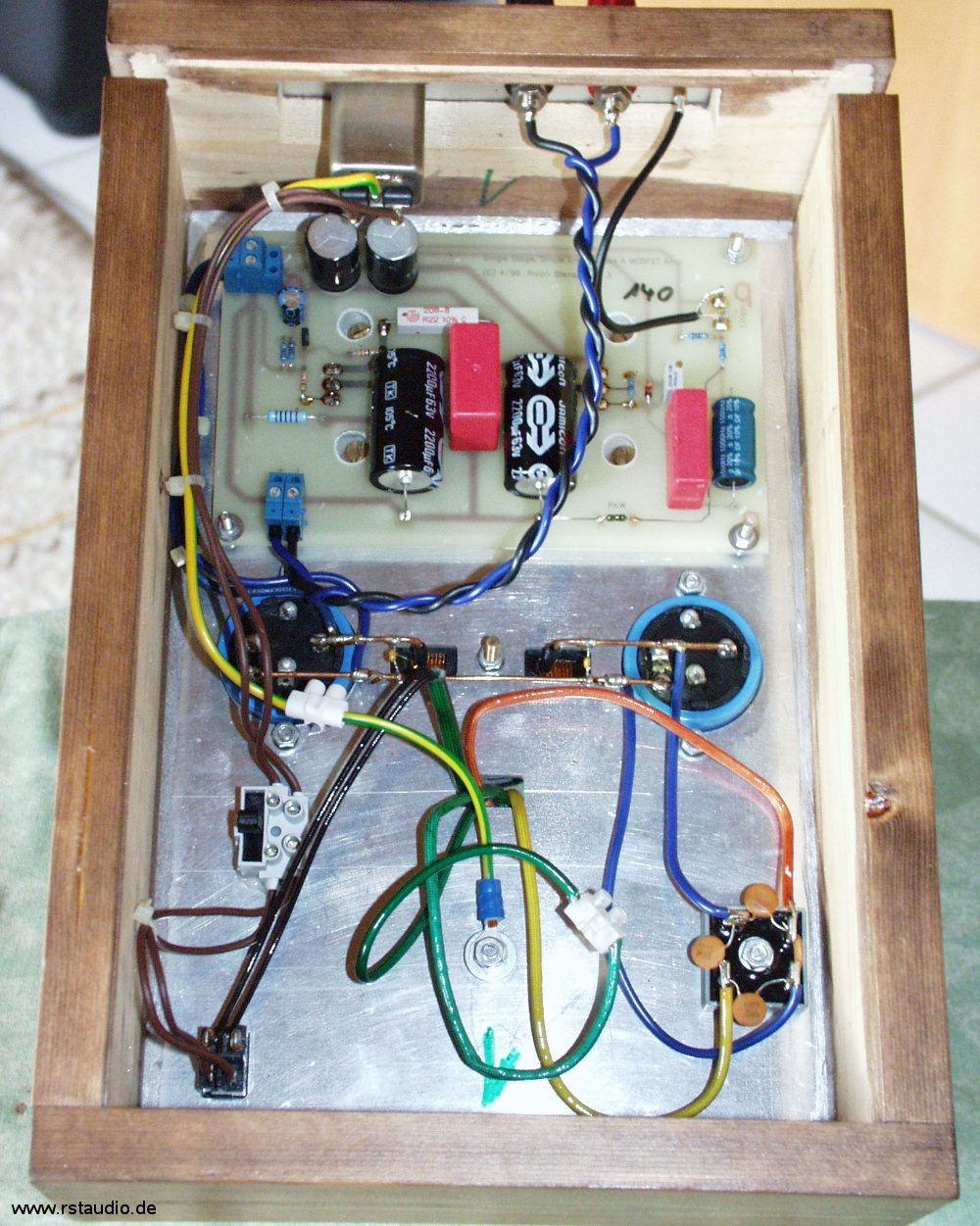 View Inside of the Son of Zen 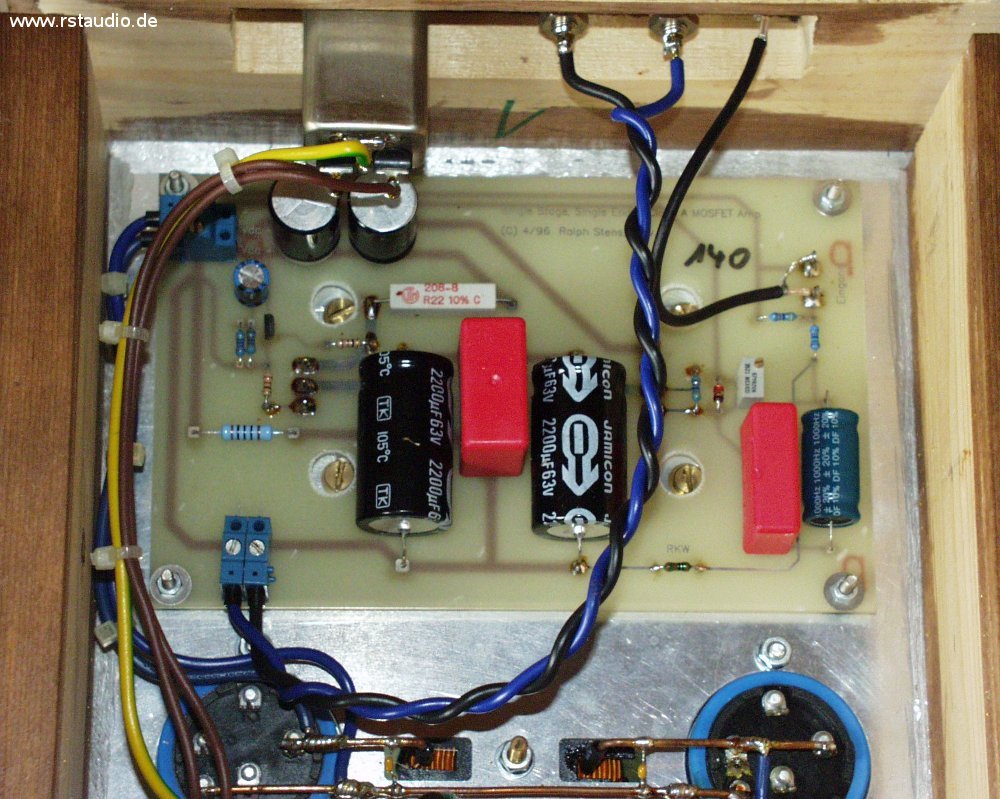 Audio Board of the Son of Zen

Here you have a closer look at the audio PCB. On the top left you find the DC connector, on the bottom left the output to the speaker. On the right side you see the signal input. 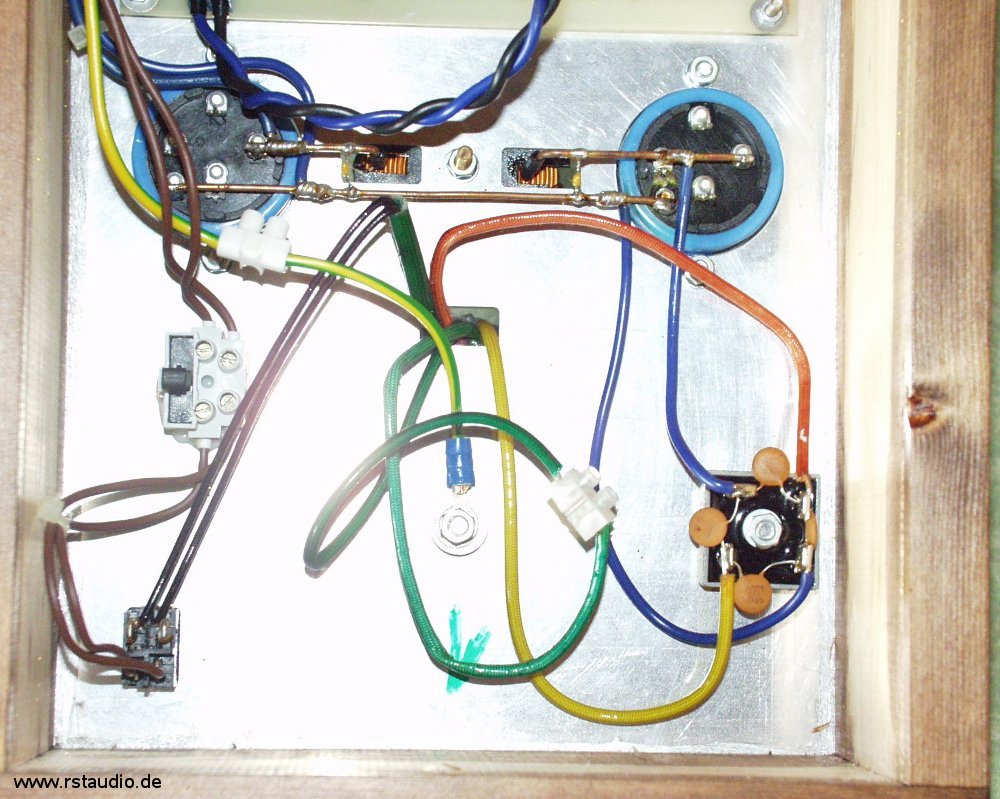 Power Supply of the Son of Zen (Bottom View)

On this picture you have a closer look at the power supply.

Connectors of the Son of Zen

These are the connectors of the Zen amp. On the left side you see the input of the 230V AC, in the middle you find the speaker connectors and on the right side the cinch connector for the input signal.

The first time I have installed a DC filter in my Aleph P. and I was against my expactations amazed from the improvments I had. Of course I became the idea to use such a filter also in my Zen amplifier. I used once again a bridge rectifier, but the values of the electrolytic capacitors must be higher (2 × 10mF/25V). The result is astonishing. The improvements are much bigger than in my preamplifier and are mainly noticeable in the bass region. 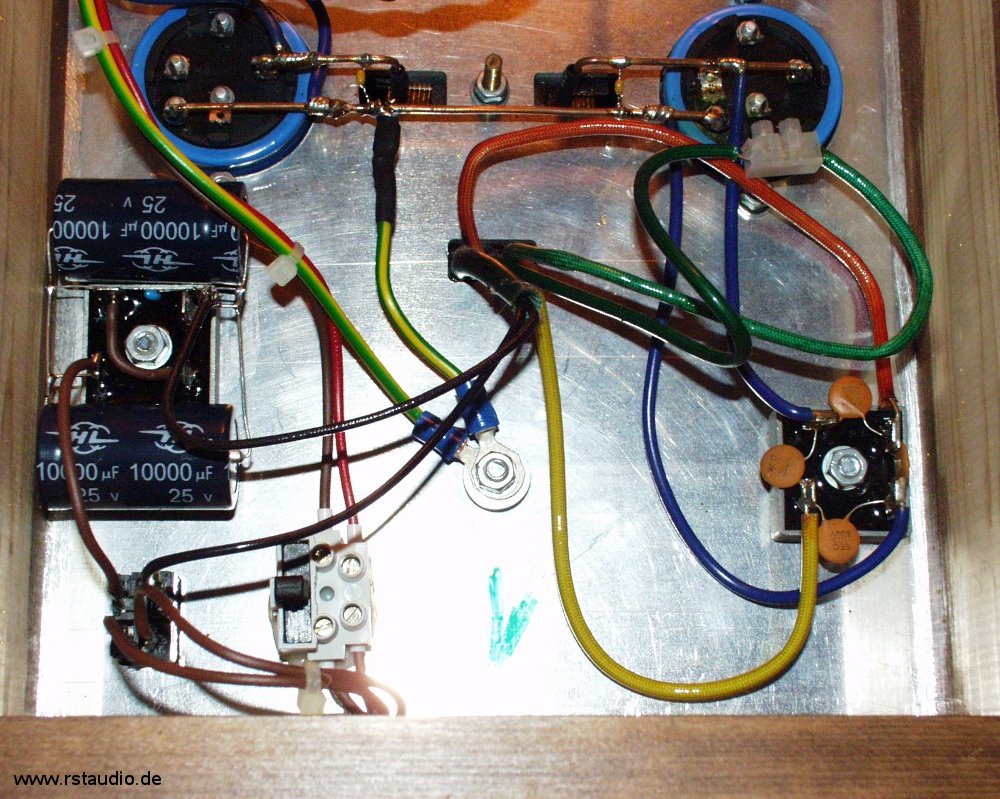 Installation of the DC Filter

In the middle of the left side of the photo you can find the DC filter. The electrolytic capacitors are soldered directly with the bridge rectifier. 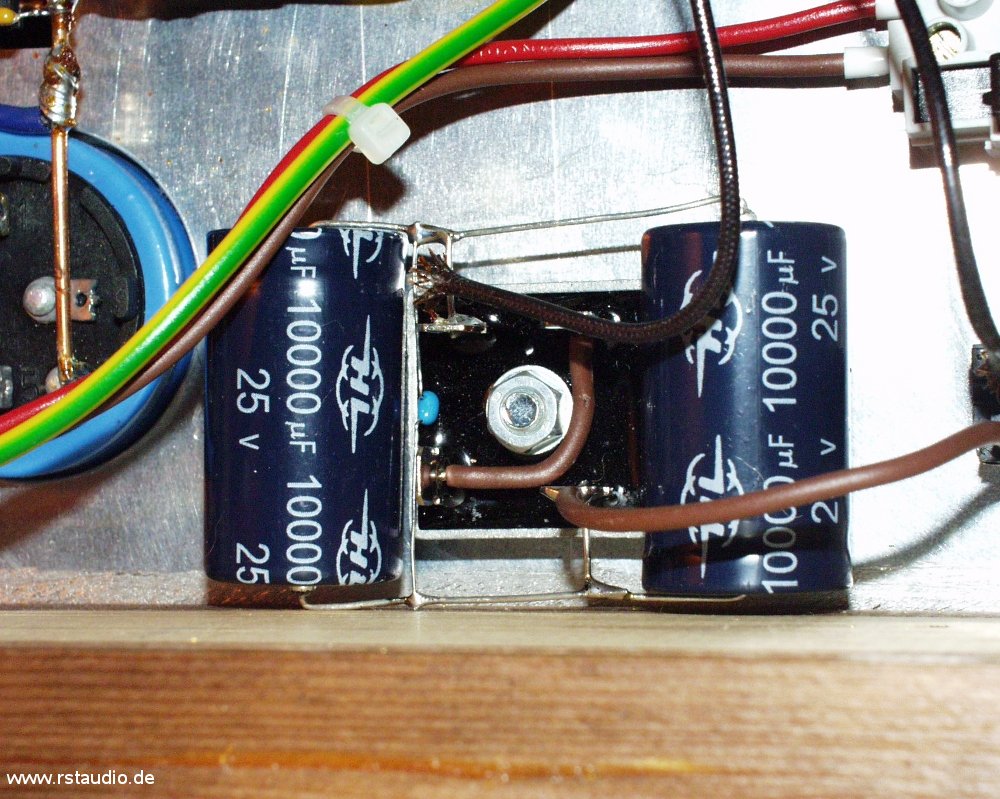 You can see here an enlargement of the DC filter. The small blue capacitor is a 100nF ceramic type.

My Zen amplifier comes up with a relatively load popp noise. Of course I have to do something against it and therefore I build the muting device you can find here.

I switch the relay with a IRF610 MOSFET. The gate is connected via a RC combination (which also defined the time delay) to the power supply. A 11V zener diode prevent the gate from destruction. A 2W resistor is used in series with the relay coil and is used to lower the voltage for the relay. It is a simply, but effective circuit which makes sure that the amplifier is now quite during the run up. 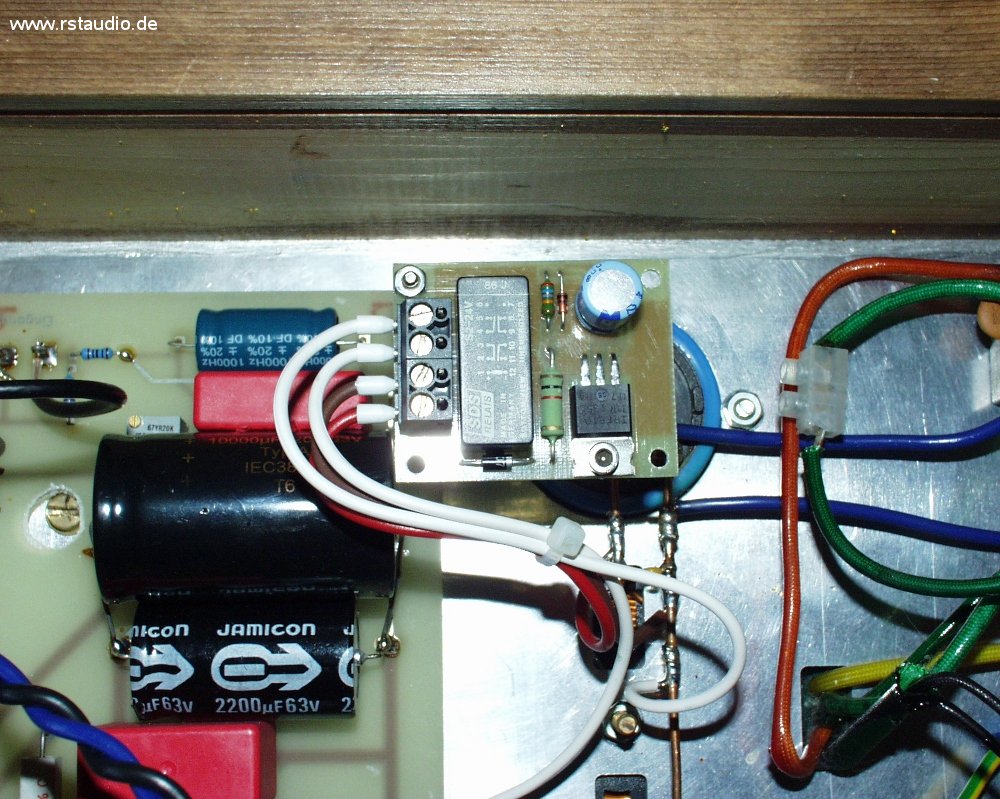 You can see also on this photo that I have implemented an extra 10000μF electrolytic capacitor in parallel to the original 2× 2200μF.