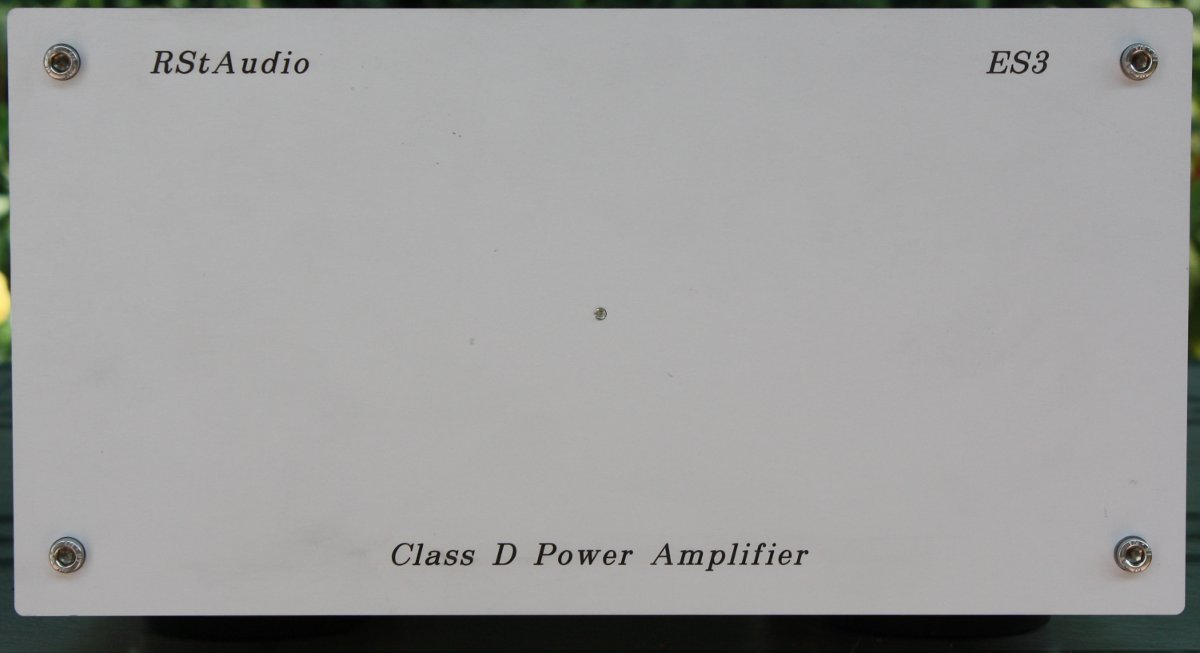 For my Ripol subwoofer I need an amplifier with enough power (≥ 150W/4Ω). At the beginning of my considerations the Hypex UcD400 modul was my favourite. But I felt a little bit discomfort with the class D mode at that time. I than started to design a class AB amplifier with the schematics of the Pass X5 as a basis (Spice simulation, schematic and PCB). At the beginning of 2009 I had the luck to buy a low priced UcD400HG module and therefore I want to give this technology a chance as a subwoofer amplifier.

On the Hypex homepage you can read the following features and datas:

Technology
The UcD™ circuit is based on phase-shift controlled self-oscillation, with only a single voltage feedback control loop taking off at the loudspeaker terminals. The control function is constructed fully out of passive components, with only the comparator standing in for gain.

The UcD400HG module has the ideal operation parameters for my Ripol subwoofer and also his differential signal input fits very good in my overall concept. 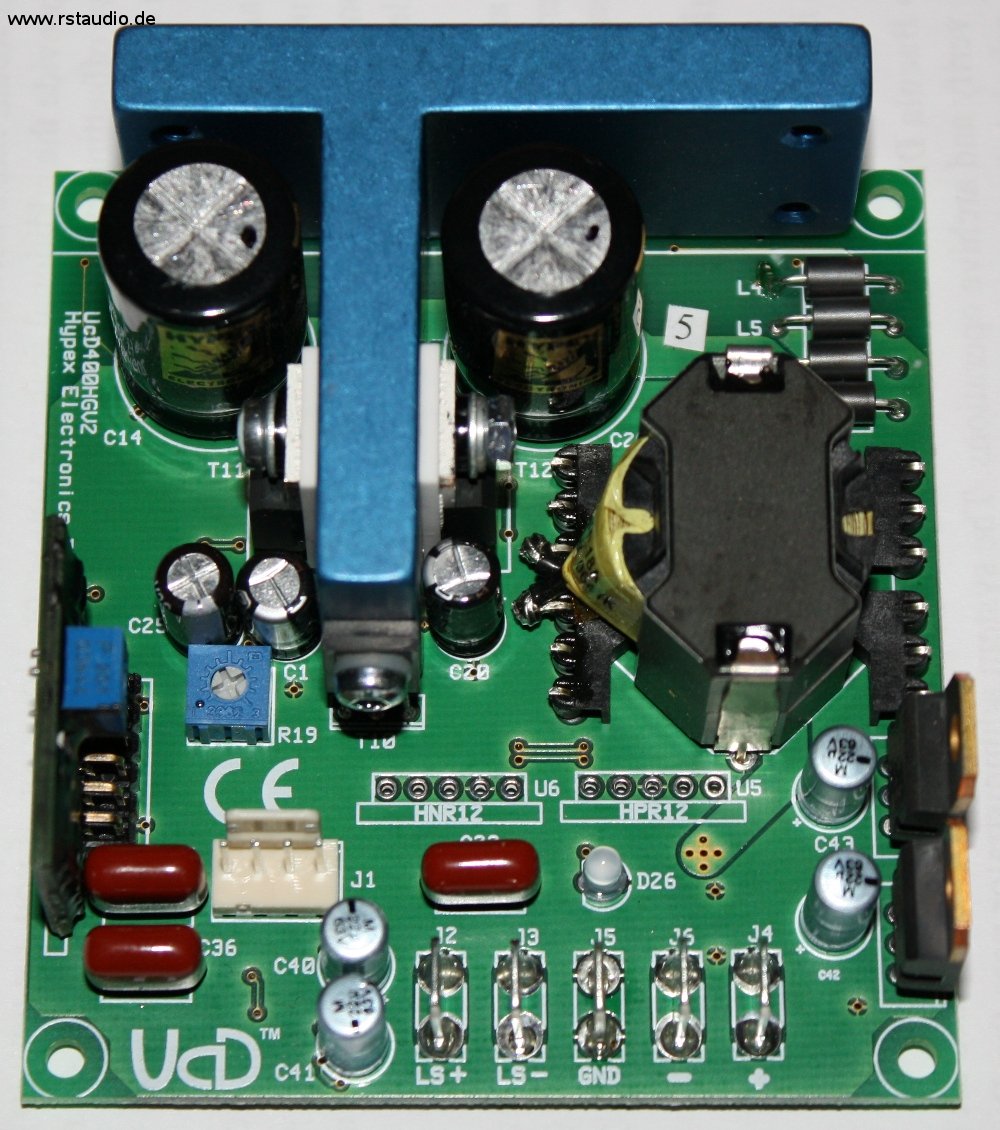 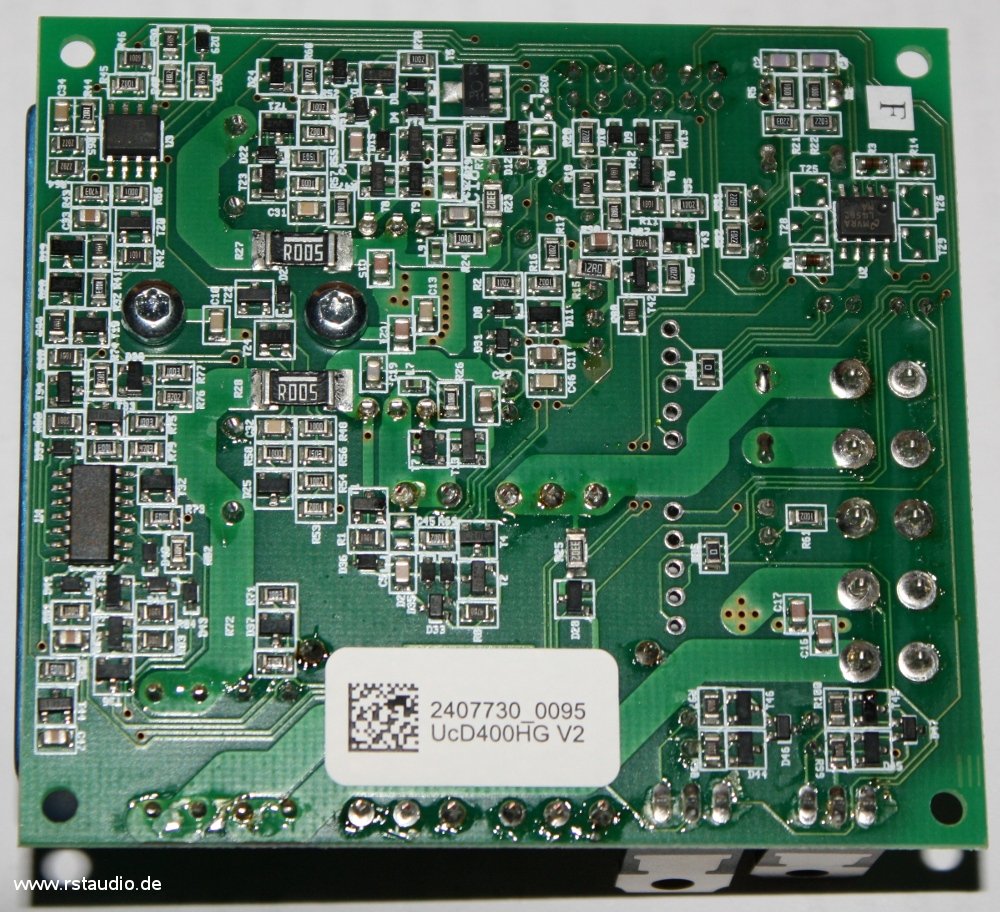 As an option for the above described Hypex modules you get the voltage regulator modules HRP12 and HNR12 from Hypex. The suppliers itself wrote

I don’t want to build the input cable by myself and bought the UcD signal cable direct from Hypex. This was a good possibility also to order both HxR modules as an add-on for my UcD400HG amplifier. 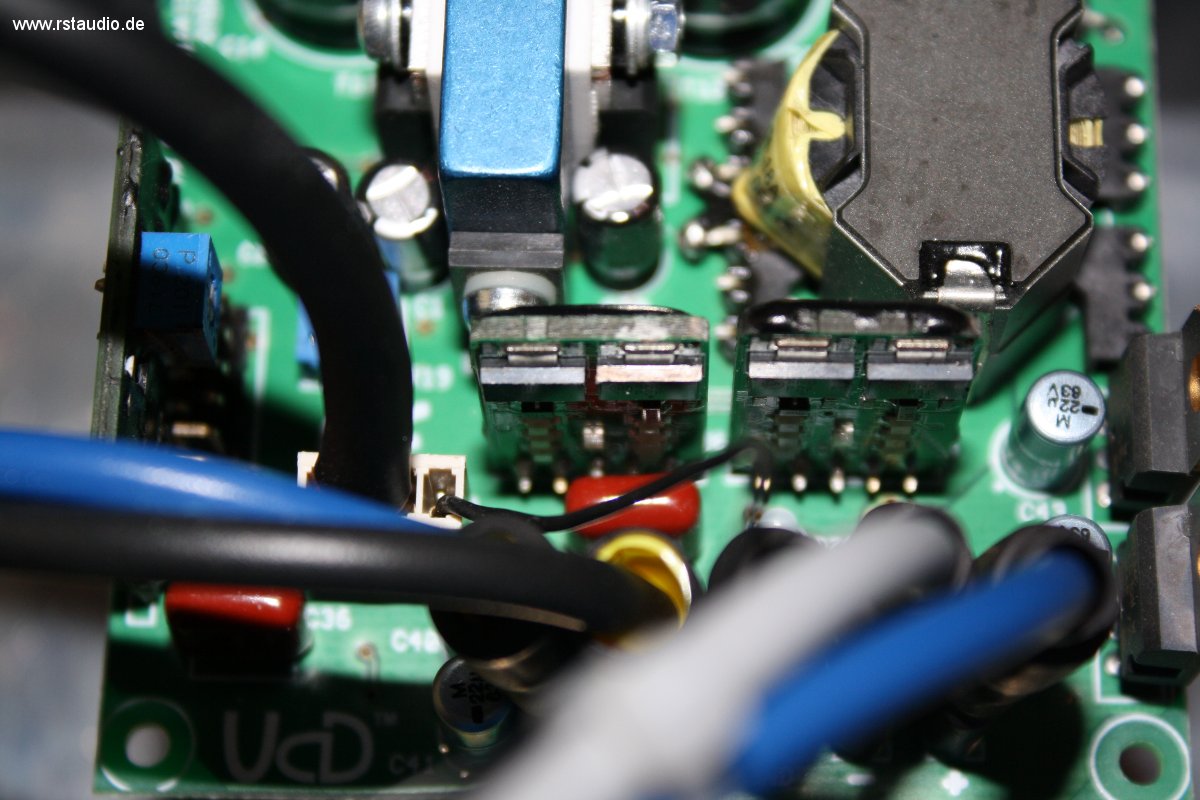 I use a classical power supply here. The symmetrical secondary voltage of the 600VA toroidal transformer is rectified from a bridge rectifier (D1…D4) and buffered by an overall capacity of approximately 88000µF (C1…C6). At the output of the power supply I use 2 fuses (4A fast), this is described in the specification for the modul from Hypex. R1 and J8 is used to connect a LED. R2, D5, D6 and C7 connects the ground with earth to avoid ground loops.

Bigger toroidal transformers (from approximately 500VA) have too much inrush current for normal fuses. Therefore it is needed to limit the current during a short time directly after the switch-on. With the circuit I describe here the power amplifier is switched on – direct or with a remote signal – and the inrush current is limited for a short time.

The amplifier is switched on with relay Rel1 or with a manual power switch connected between J3/J4 and J7/J8. The relay Rel2 is directly after power on not switched and therefore the overall current is limited through the resistors R1…R4 to approximately 5.75A. With C1, BR1 and R7 the capacitor C2 is slowly charged and after the voltage exceed the switching on threshold of the relay Rel2 the current limiting resistors are bypassed.

Relay Rel1 is switched on with a remote voltage. This voltage must be permanent available during normal operation of the amplifier – if the manual switch is not in use – and it should not be lower than 9V. This remote voltage is connected to J13 and is stabilized with the voltage regulator IC1 to 6V.

Every device in the remote chain creates his own remote output signal to switch on the next system. This signal is delayed to approximately 3s. This guaranteed that all devices in the chain are not switched on at the same time so that the overall inrush current is low enough.

For the remote voltage a 9V/AC signal at J16/J17 is needed. It is rectified with BR1 and buffered with C8. The capacitor C10 is slowly charged via R10 and opens bipolar transistor Q3 via R13 and so MOSFET Q1 after a short time (around 3s). R8 limits the output current with the help of Q2 (Iout = UBE / R8). 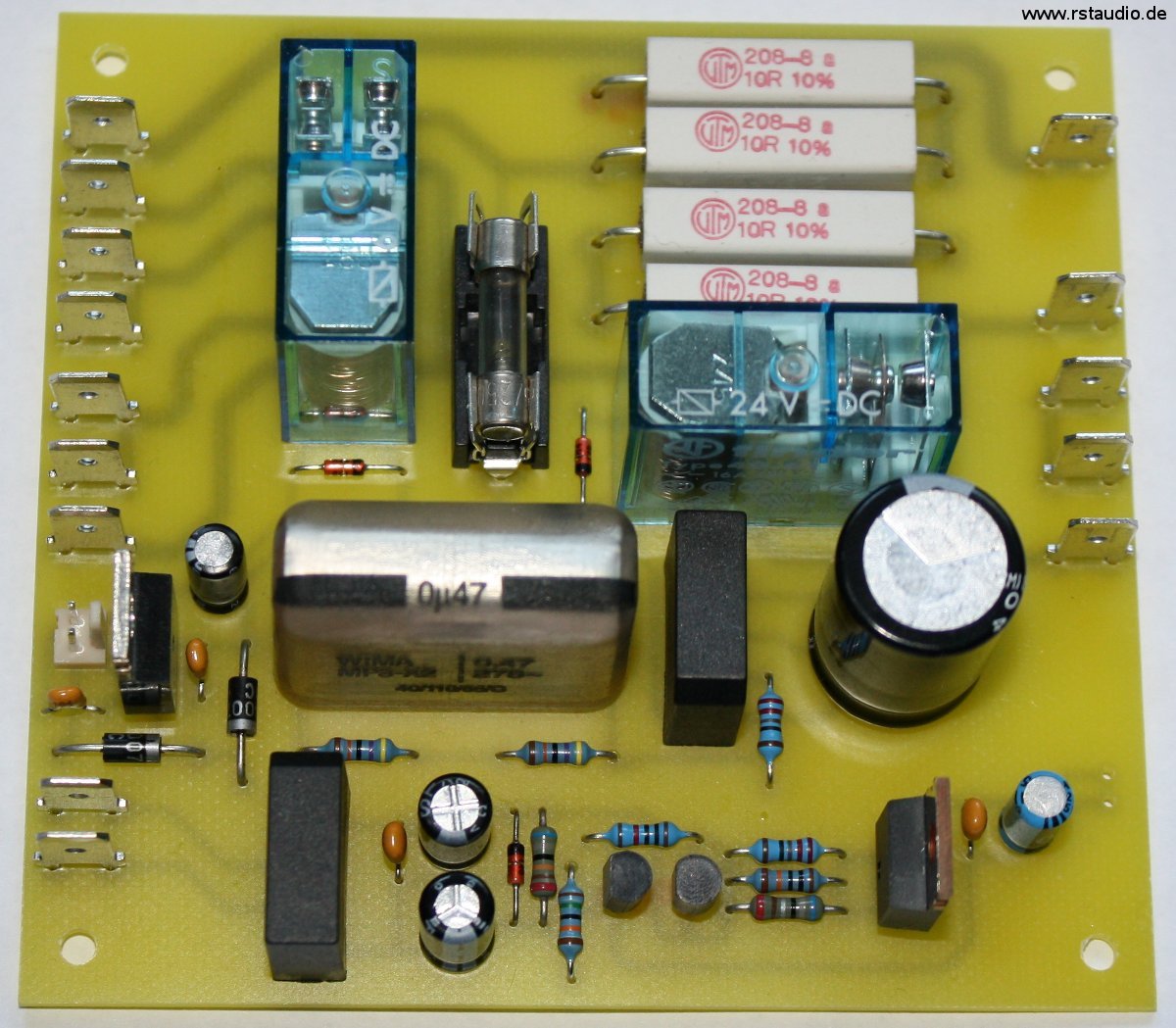 Assembly of the Amplifier

For the first commissioning and test I build up the complete amplifier on a wooden plate. On the picture below you find at the left top the Hypex module mounted on a heat sink. Underneath the compensation network for the RiPol subwoofer is placed. This network is electrically wired between the output of the amplifier and the input of the subwoofer. In the middle of the plate the 600VA toroidal transformer is assembled. Above the transformer the power supply with the bridge rectifier and the four 22000μF electrolytic capacitors is mounted. The board below the transformer is the remote switch. 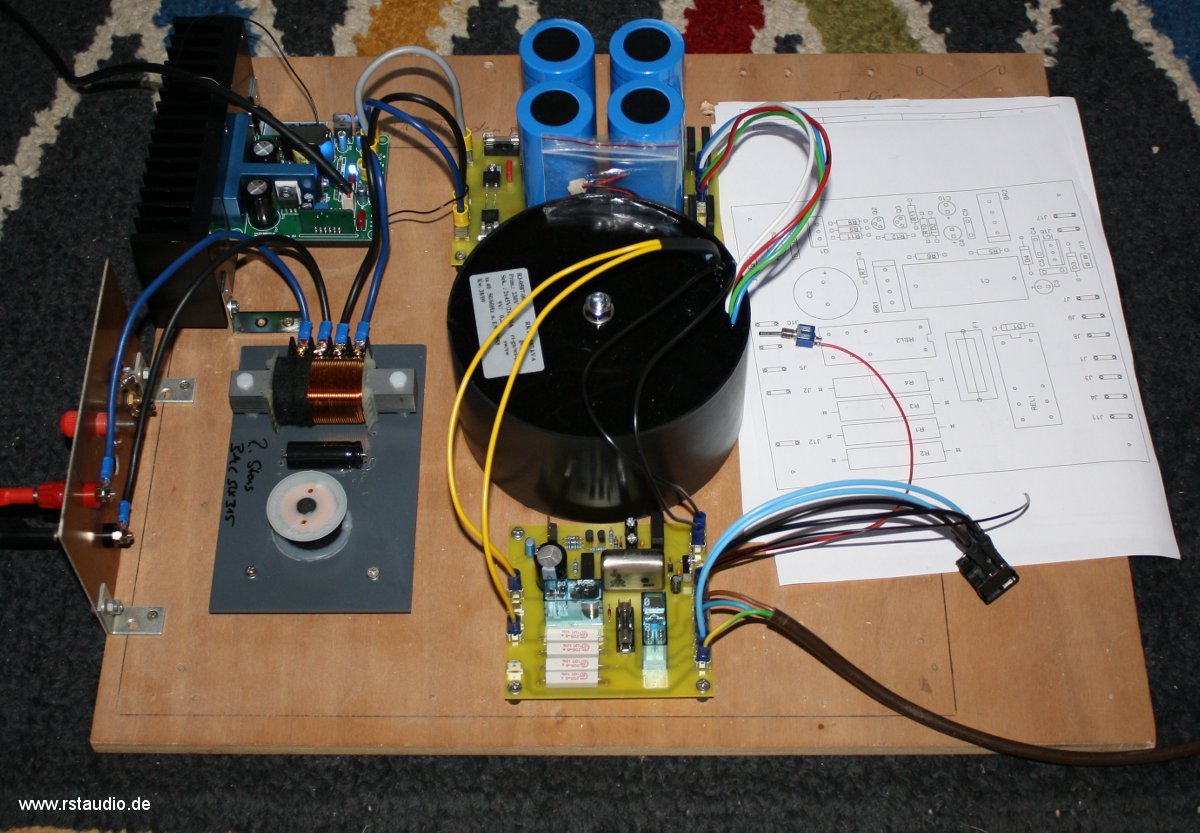 Prototype of the Hypex Amplifier

After all needed components are bought and assembled and the prototype was commissioned I started thinking about the enclosure. It should be as small as possible, but I want to place also the RiPol compensation network inside the amp. In the end I found nothing adequate on the market and so I decided to build the enclosure by myself. I have access to a Datron milling machine and therefore it was not so difficult to do that.

The following components of the amplifier have to find a place inside the enclosure :

The Hypex module is screwed direct on the heat sink. The heat sink itself is mounted with 6× M4 screws at the back plane of the enclosure. 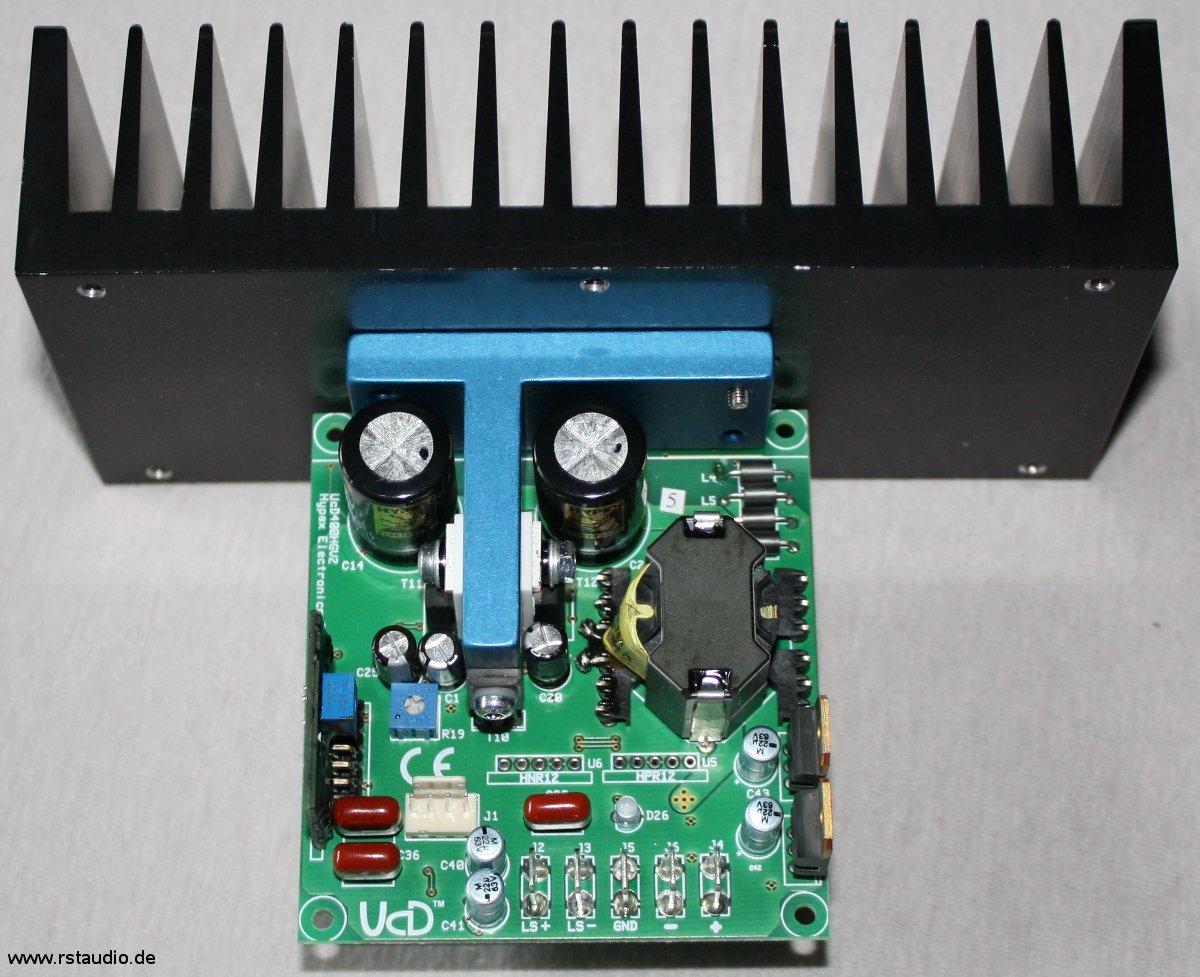 The base of the enclosure is build with a 4mm thick aluminium plate. The transformer is mounted on a second plate which is fixed on the base with rubber buffer. This avoids every mechanical noise of the transformer. The power supply board and the DC filter is also screwed on the base. 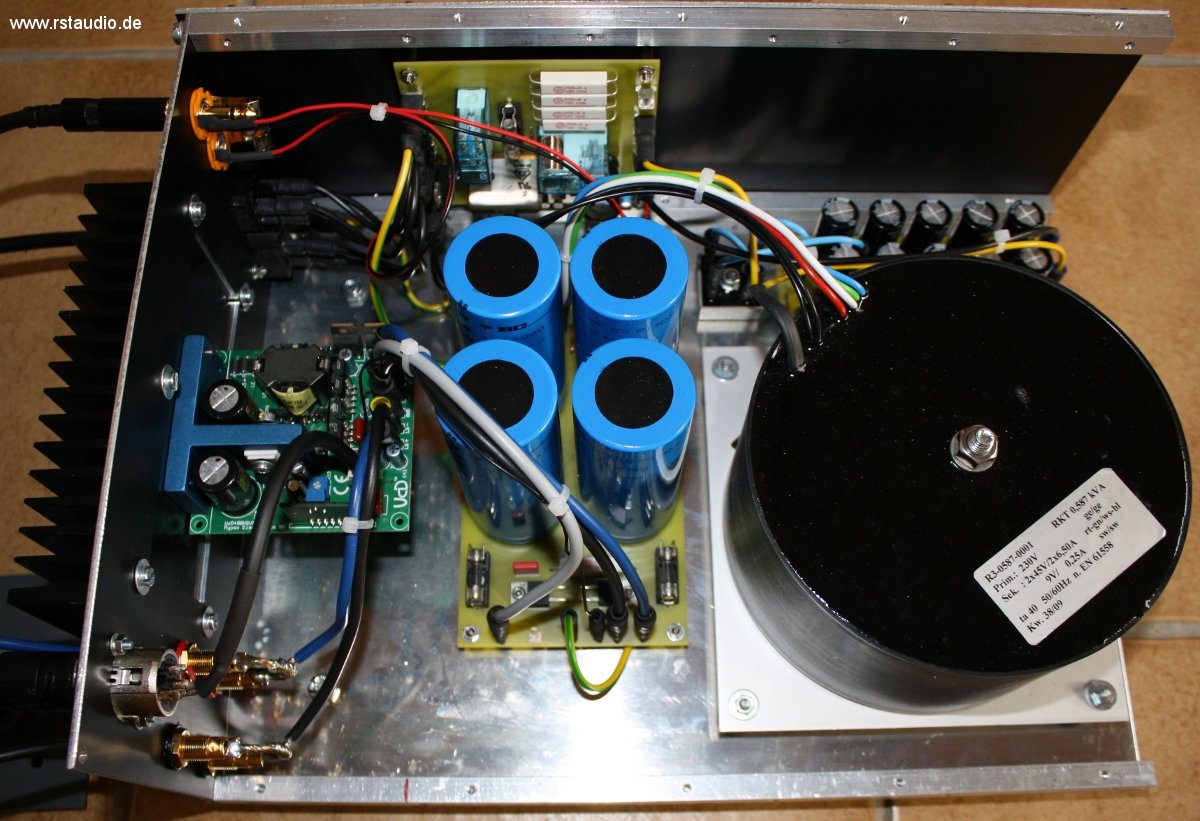 For the side panels 3mm thick black anodized aluminium plates are used. The board for the remote switch is fixed at the right panel. This gives very short cables for the 230V/AC cabling.

The back panel is build with a 2.5mm thick black anodized aluminium plate. On the left side (front view) all audio connectors are placed. In the center the Hypex module is mounted and on the right side all 230V/AC connectors and the remote in- and output are placed. All electronical components are arranged in a way that the cabling is as short as possible. 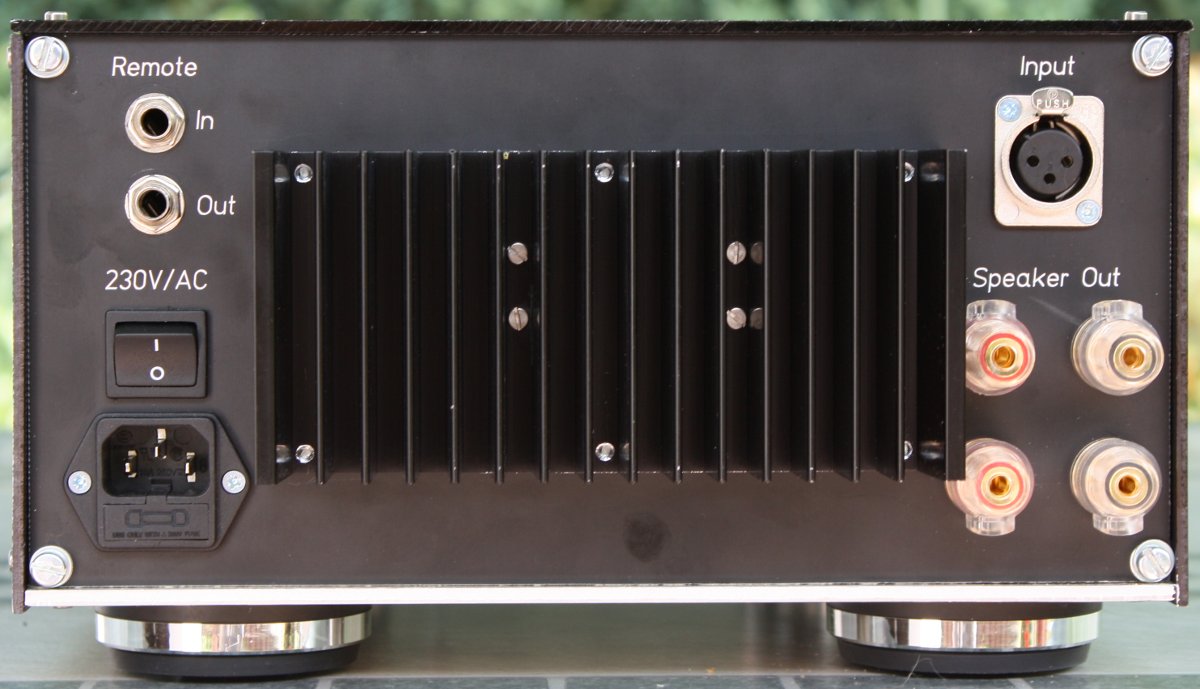 Back View of the ES3 Power Amplifier

Originally the compensation network for the RiPol should find its place on the left side panel. During the assembly of the enclosure I notice that the inductors of the network produce some noise coming from the electro-magnetic field of the transformer. This is the reason why I decided to use an own enclosure for this network outside of the amplifier.