… life, the universe and everything …

In December 2012 I had the luck to meet my friend Jürgen. At that time I’m working since a longer period on a motor control for a record player. I had a DIY player with Scheu components in use with an ebmPapst motor. To measure the rotation speed I modified the Scheu turntable with markers. Everything was functioning to my satisfaction and as a next logical step I thought about the development of a complete record player. I had some nice ideas, but my background is electrical engineering and so I hadn’t the needed professional knowledge to fullfil my own requirements. But with Jürgen as my partner we both have enough expertise for such a project.

What we didn’t expect is that we had to learn so much about an assumed simple topic. At least we need around 5 years to finish this project.

Some of the boundary conditions for the development of my record player are naturally fixed for me from the beginning:

The large diameter of the turntable limits the operation of tone arms so that only 12″ types are usable. This might for many of you certainly a disadvantage, but for me it is a logical consequence of my preference for longer tone arms. The main part of the weight, of the at least nearly 40kg heavy turntable, is located at the outer edge which benefited the moment of inertia.

Who is asking himself why I choosed a diameter of 42cm, has obviously not my age and hadn’t studied electrical engineering, mechanical engineering or computer sience ☺. 42 is the answer to the ultimate question of life, the universe and everything – more details you can find here.

At the 2017/08/16 this player had finally replaced my old DIY Scheu construction.

The buildup of this player consist of a series of materials which we choose through experiments. We use C45 steel, wood, schist, aluminium, gray iron and different synthetic materials. The production technologies of this parts are from waterjet cutting over CNC milling to 3D laser sintering. But mainly it was a lot of perfectly made handwork. The surfaces of the raw materials are not changed – e.g. no epoxal or chrome – so that the specifically characteristics of the materials are not influenced and therefore garantee the perfomance of this materials. Where we had to protect a surface we used a special wax.

A precision bearing with a lifetime solid lubrication and an extra thick precision-ground spindle takes over the horizontal bearing of the turntable. Three air bearings adapted to the load capacity of the overall weight of the turntable with an air gap of 5μm are responsible for the vertical bearing. With this implementation we have no noise and no slip-stick effects from the bearings.

The turntable itself is made of aluminium and has a weight of nearly 40kg. To measure the rotational speed markers are placed at the bottom side. As I wrote above the diameter is 420mm. The bigger part of the material is placed at the outer edge which gives us as much as possible inertia. The record disk itself is placed on an exchangeable base, so that we have the possibility to experiment with different materials. I selected vinyl (polyvinyl chloride – PVC) as a starting point. The bolt is placed on top of the turntable and has no direct contact to the bearings.

The player sits on top of 4 in the hight adjustable bases. Each base consists of two parts which are only connected via a ball, finally the complete player stands on that 4 balls. In each lower part of a base an additional damper is mounted. 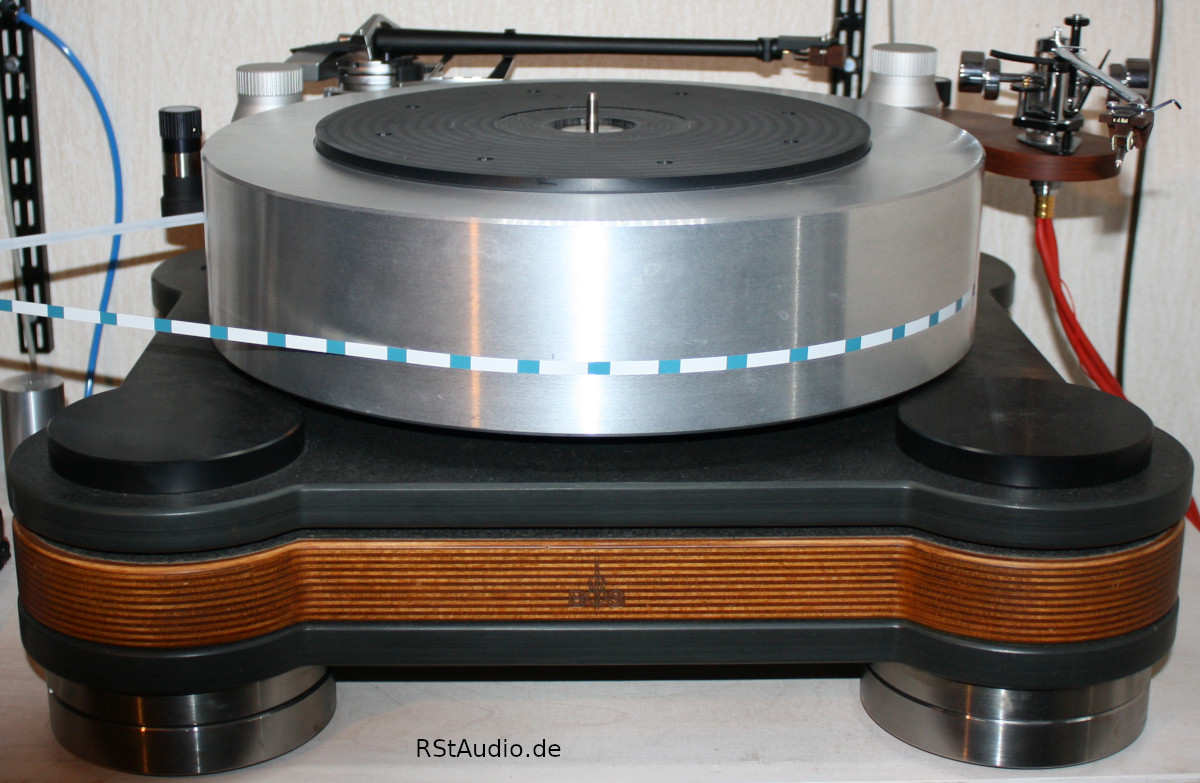 As you can see on many other heavy mass record player it is possible to assemble up to four tone arms on my player. One in every corner of the base. The tone arm is bolt on an universal constructed arm. To achieve the correct distance between the tone arm pivot point and the midpoint of the turntable the base arm must be turned in the correct position around it’s clamping bolt.

My preferred pick-up respond very sensitive to the VTA adjustment and therefore you can hear tonal differences between normal vinyl and such with an audiophile weight which are thicker.
(VTA: Vertical Tracking Angle – more here)

How to adjust the tone arm correctly for this situation? For the bigger parts of my normal vinyl or to hear my thicker audiophile vinyl optimally. Or a compromise between both? Finally I have spend a lot of money for my tone arm and my pick-up and I want to have the optimal setting for every vinyl I want to hear.

The solution is an on the fly vertical adjustment of the tone arm base without an arrester. Exactly such an adjustment we have realized. The construction of the mechanic uses an anti-backslash gearing mechanism with a repeatable adjustment of the height per turn of the tuning knob. The zero-point of the basis can be moved within ±12mm in the height which is enough for every situation. Optionally a dial indicator gauge can be integratet. 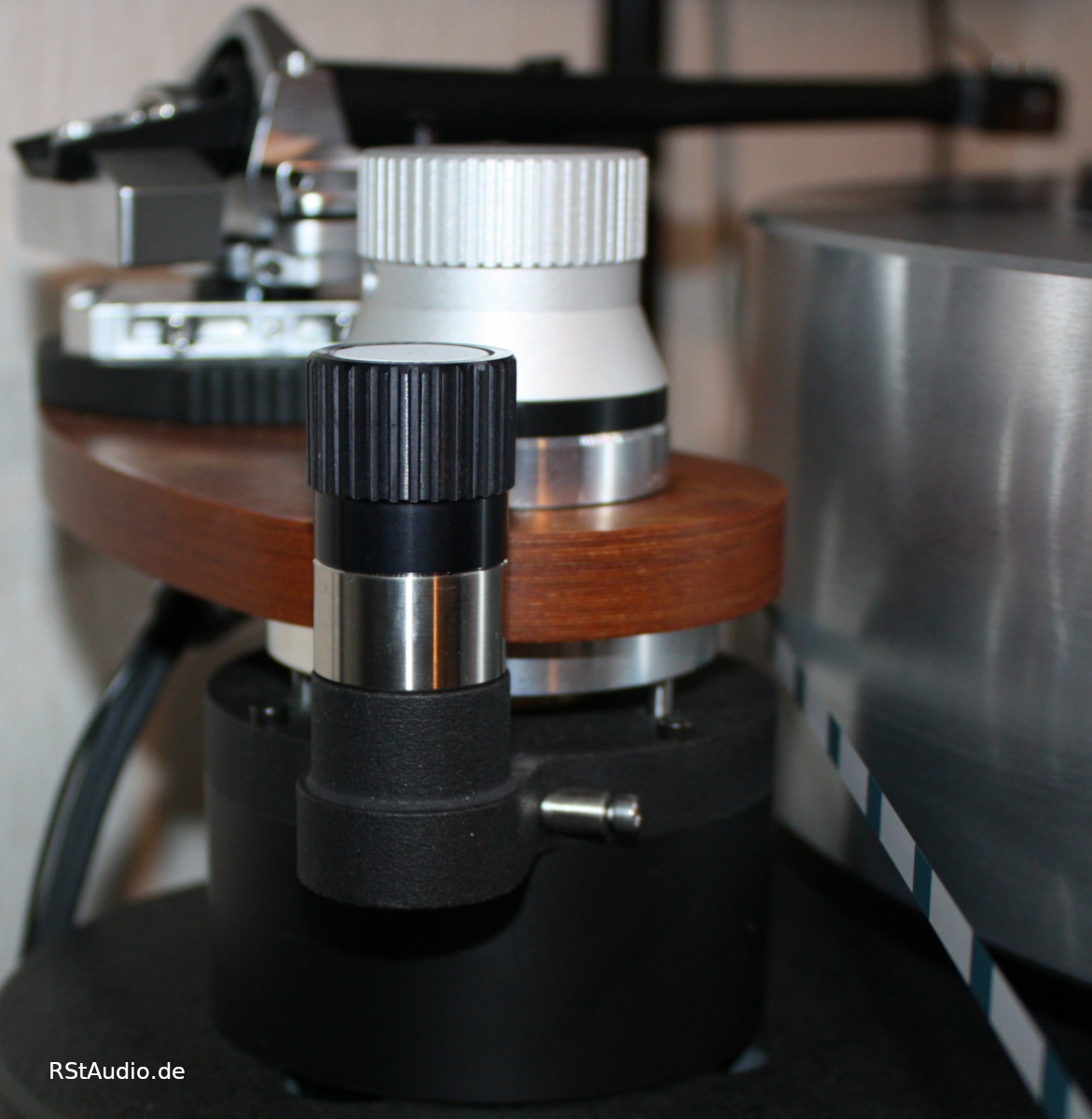 Vertical Adjustment of a Tone Arm Base

At a well known heavy mass record player with magnetic bearings I measured the remanent magnetism with a simple compass on the surface of the turntable. In doing so I saw noticable movements of the needle. This was the reason why I decided years ago to use an air bearing. I don’t want to have a magnetical field nearby my pick-up.

As is known compressed air is a very expensive energy form and if you want to build the system as perfect as possible the effort is respectively high. The system I have actually in use is a compressor, an air dryer, a 14l big reservoir with an integrated pressure reducing valve, a proportional valve to set the flow rate electronically and a 0.2l settling vessel directly implemented in the player. Thereafter the compressed air is distributed via a loop air line to the 3 air bearings.

Especially the air dryer is a very clever construction from my friend Jürgen. A suitable systems is in a price range above 1500€. The solution comes from the automotive industry and is normally used in trucks. It is even a regeneration of the dryer cartidge integrated – as I said, very very clever.

When I saw the 3 motor drive of the TW Acustic Raven Black Night from Herne/Germany, I knew that I want to do it exactly in this way at my own record player. A 3 motor drive with this arrangement is for me the correct way.

Although the arrangement of the motors is designed as at the Raven Black Night, the rest of the motor drive is more complex. The motor in the middle can be shift with a turning knob, so that you can optimize the initial tension of the tape – which I have in use instead of a belt. This is significantly more accurate compared to only shift the complete heavy motor drive.

Besides that the 3 motor drive stands are adjustable in the height. With this you can not only aligned the drive exactly horizontal, you can also set the belt at the center of mass of the turntable.

The pulley’s are precision turned and they have in the middle a collet chuck towards the motor shaft. This guaranteed that they sit exactly in the middle so that they run without an eccentricity.

We disassemble the motors before we use them and exchange the internal bearings with precision bearings. The quietness becomes significantly better with this.

The basis of the drive electronics is once again the AT89C51ED2 microcontroller from Atmel, but here in the version with 6 ports. It is controlled by a rotary encoder and an LC display (2 rows, 20 columns). The software has grown a lot over the years and has a lot of features around the operation of a drive.

The motors we use have their own integrated electronics and require some status signals and a square wave signal whose frequency determines the rotational speed. This frequency is generated by a DDS chip with a quartz reference. The output frequency is set in the chip by a 28 bit register, which corresponds to an extremely fine frequency resolution below the sensitivity threshold of the motor electronics.

Under the plate there are optical markings which are scanned by reflection sensors. With the resulting measuring signal and a reference frequency, the current speed can be measured with high resolution. The software is written so that the drive can be operated either in Open or Closed Loop. Both operating modes with measurement of the rotation speed of the plate.

During my experiments with the ebmPapst motor it turned out that it runs much smoother when powered by a battery. Since the nominal operating voltage is 24V I connected two 12V/7Ah lead-gel batteries in series. These batteries are charged when the drive electronics are switched off. Each time the engine is started, the battery voltage is measured first. If it is below a given value, the drive cannot be switched on. This prevents a deep discharge of the batteries, but this has never happened in all the years and I still use the first set of batteries.

Tools for the Record Player

If you build your own drive you have the advantage that you know all the dimensions or you can get it from the CAD system used.

What has always bothered me are the expensive tools for distance measurement, disc center and pivot point tonearm, which you can buy on the market and with which you ultimately can not determine the distance as exactly as many manufacturers of tonearms pretend.

With my Mørch DP-8 with a 12″ tonearm tube this distance should be exactly 294.1mm. But unfortunately the pivot of the arm cannot be determined exactly and the scale of my distance tool does not really show the setting in 1/10mm.

The solution for my drive is a fixed distance tool per used tonearm. We know exactly the plate diameter as well as the diameter of the circular disc at the end of the tonearm extension – where the tonearm is mounted. This allows you to determine exactly how far the two circles have to be from each other to have the exact distance to the center of the arm. The tool now consists of a flat piece with a long hole and a cylinder with the exact diameter of the required distance. The tool is simply placed on the plate and the plate is rotated until the maximum distance is reached by the 3 circles – simple and effective.