In spring 2006 I started to work on the development of an active crossover (in parallel to the design of a subwoofer). The first thing I did, of course, was to get hold of the available documentation on the Pass Labs XVR1 and try to find out the technology behind this design. However, I was not satisfied with the results of various simulations regarding the transfer functions of the presumably used filters in this crossover. For me, a smooth frequency response in the summation of all partial frequency responses and the same phase response of two neighbouring filters in the transition area was a basic requirement for my design. However, I really liked the use of discrete operational amplifiers in the XVR1.

In the end, only state-variable or sallen-key filters came into question for the filter design. I decided to use Sallen-Key filters because of the smaller number of operational amplifiers needed per signal path. A very nice paper about such a crossover can be found at Elliott Sound Products.

From the design of the XVR1 I took over the adjustable frequencies via jumpers. In addition, I added a stage for adding the two low frequency signals – mono signal for the bass – with the subsequent possibility of adjusting the phase and the frequency response. Both channels including the necessary power supplies – again in the proven double-mono design – are placed on one board.

The filters consist of a normal Sallen-Key filter structure that can be found in any textbook on active filters. With 2nd order Butterworth coefficients, in the low-pass filter both resistors are equal and the capacitance in the feedback is twice as large as that at the positive input of the OP (see above left). In the high-pass filter, the positions of the resistors and capacitors are reversed. The two capacitors have the same value and the resistance at the positive input of the OP is twice as large as the feedback resistance (see above right). It makes sense to preset the capacitors (E12) and calculate the resistors (E96) when determining the component values. The resistance results from specifying the capacitance and frequency:

The double values of the components are obtained by connecting two equal resistors in series and two equal capacitors in parallel.

All these considerations led to the following requirements:

The following circuit diagram is the result of the above requirements:

With the selected resistance and capacitance values, the following crossover frequencies of the filters are obtained:

Assembly of the Crossover Network

I have installed the crossover in a Slim Line cabinet with a 10mm thick front panel from HI-FI 2000. The rotary knobs are also from the same manufacturer. I made the mounting plate for the electronics myself. All the machining of the cabinet was done by me on a Datron M35.

The controls of the crossover can be seen. On the right you can see the level control of the high and low pass channel. On the left are the settings for the mono subwoofer channel – the level control, the bass boost/cut control, the 180° phase rotation switch and the continuous phase shift control.

The picture above shows the installation of the electronics. You can see the large audio board with the filters and the power supply. To the right of it you can see a small circuit board on which the remote switch-on is located.

Here you can see the connections on the rear of the crossover. On the left the two symmetrical inputs, on the right the outputs for the high- and low-pass channels and the mono signal for the subwoofer. Via remote, the signals for switching on the system are fed in and out via a control voltage. On the right side you see the mains socket, the mains switch and the fuse. The earth socket connects the earth of the audio circuit to an earth bar.

Replicas of the AFW1

Every now and then I build a crossover for an audiophile “fellow sufferer”. I don’t want to hide the pictures.

The AFW1 by Volker W.

I put this crossover in an enclosure with aluminium bottom and top plates, so the mounting plate could be omitted. The cabinet is also shorter. On request, the electronics for remote switching are missing. For the input and output sockets I put other connectors on the PCB. In addition, other rotary knobs have been added to the front panel. 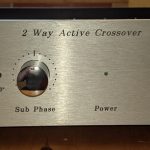 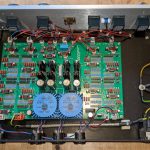 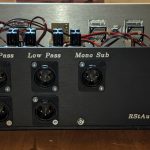 The AFW1 by Guido F.

The special thing about this AFW1 is the front panel. As with the XOno 2019 for Guido, the front panel has been milled by Clearaudio’s main supplier. The knobs are also individually manufactured. In addition, the fonts have not been blackened at Guido’s request. 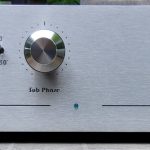 To the right of the filter board is the remote on/off control. The unit is switched on and off by a DC control signal from the preamplifier.