The topology has of course remained the same:

If you are interested in my first experience report you can still reach the page under the link Computer Audio 2017.

I have not changed the hardware of the Control PC, it is still performant enough for the requirements that are set for it:

On the SSD is the operating system with all necessary drivers including the audio software, on the hard disk the music files are stored.

For the Audio PC I bought completely new hardware – even though I had no problems with the old hardware until now. The Aaeon embedded computer wasn’t very flexible concerning its hardware and was quite old.

Since the audio PC is located directly in the listening room, there are of course increased demands on the hardware. It must not have any rotating parts to work silently. Therefore a passively cooled casing and a powerful processor that produces a reasonable amount of heat was needed. 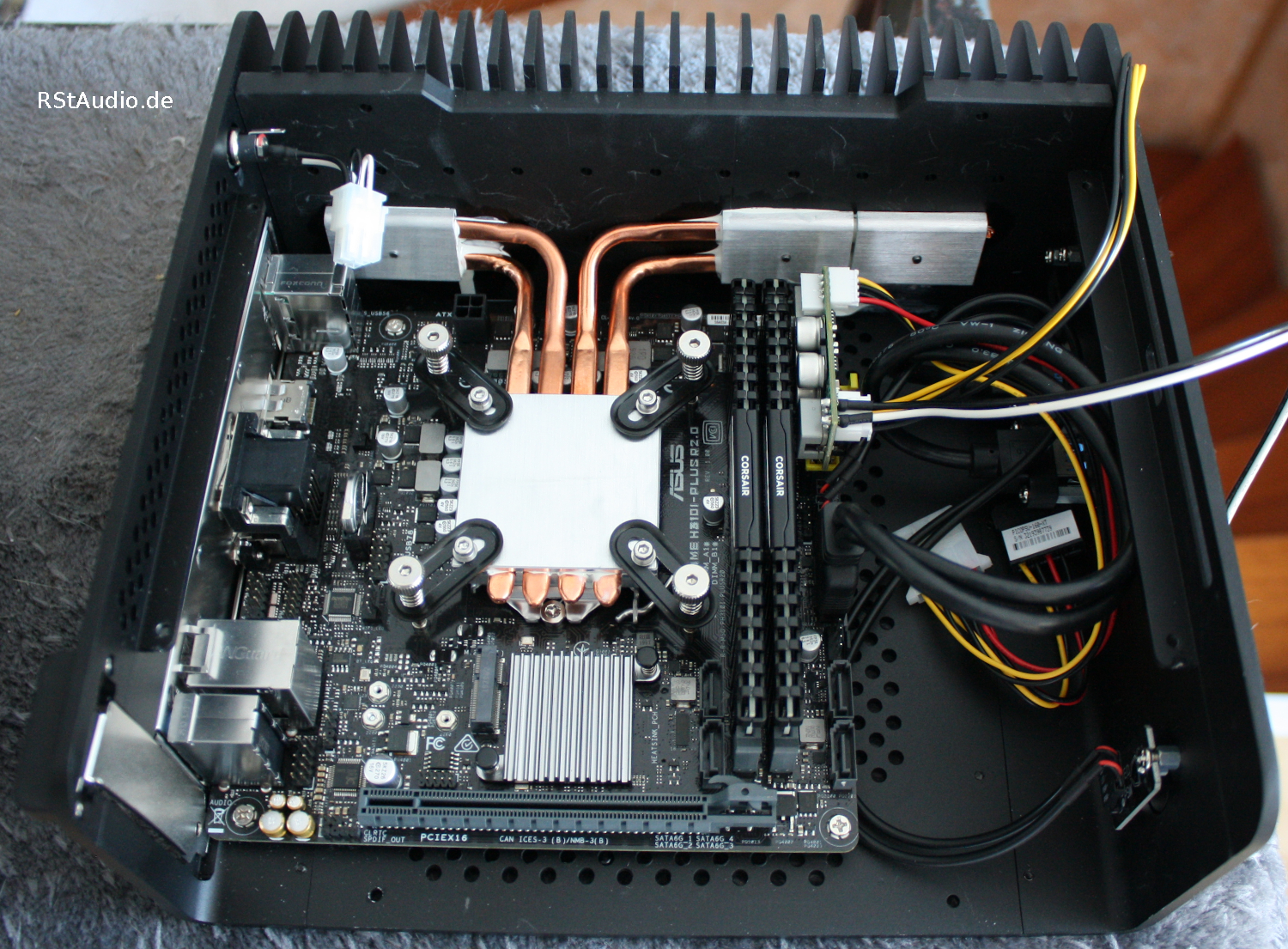 View into the opened Audio PC

The installation of the hardware in the Streacom case is very well documented, but requires some manual skill. For this you will be rewarded with a very nice case that integrates well into the audio equipment park.

If you want to set up a high-end computer audio system based on Windows operating systems, you should first download the manual of the Audiophile Optimizer. Besides the description of the actual software, there are lots of useful tips for such a system – it is certainly a very good start into the topic.

However, it does require some profound knowledge of PC technology and the operating systems used to be successful. Also this time the installation of the software didn’t run really smoothly and without my decades of knowledge, not all problems could have been mastered.

The following software is installed on the computers:

The Core Mode is considered the optimum in the scene. Of course it is a Windows operating system without a GUI to manage, but the limitations are not as big as they seem to be at first and I can only recommend everyone who wants to set up such a system to try it with this mode. It is definitely worth the effort.

At the time of installation JPLAY 7D and Audiophile Optimizer 3.00 were actually up-to-date. Without these two software packages, in my humble opinion, a high-end computer audio system is NOT possible. They turn the ordinary PC’s into serious audio players. A short description of these packages can be found under the following link on my Software page.

Under the following links you will find my current Audiophile Optimizer settings of the PC’s:

I assume that such a digital system does not need any break-in time and so I think you can give a review shortly after the installation.

As expected, the performance of the system has improved even further, but the difference between Windows Server 2012 R2 (Minimal Server Mode / Core Mode) and Windows Server 2019 (2× Core Mode) is not as big as the very positive reports would have us expect. So my evaluation of the comparison of both systems is not so euphoric. However, I prefer the system today than before and I would do this step again. If you set up a completely new system it is of course no question which operating system with which mode you should use.