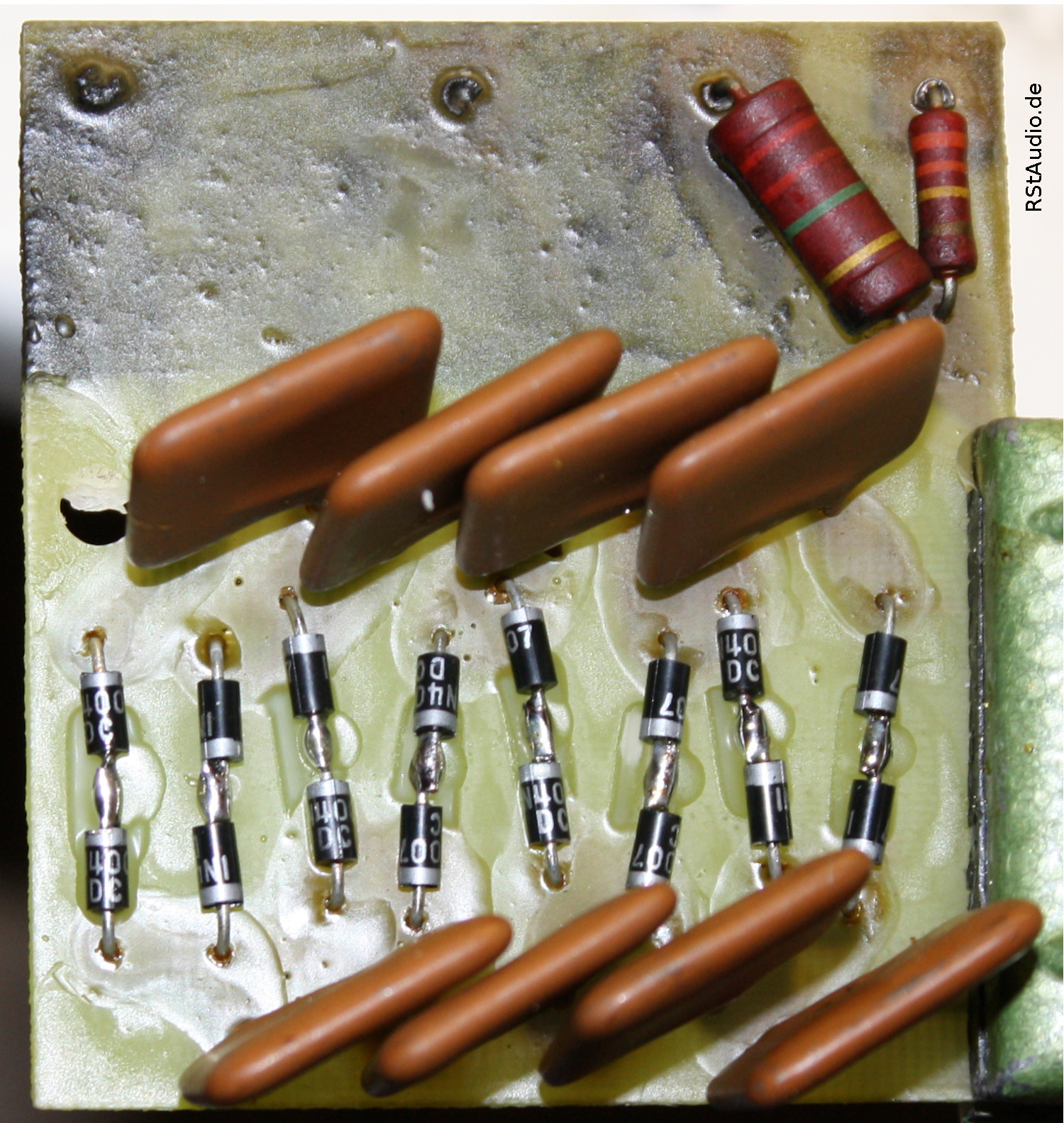 After the Quad’s had run for over 30 years without any problems, it was time to do some renovations. The most important work was to replace the diodes in the high voltage cascades, because they age with time and so the nominal bias voltage on the foils is no longer present (1.5kV high tone and 6kV low tone). Furthermore I replaced the rather modest original speaker terminals. The last modification I made for the time being was a surge protection for the tweeter foil.

To get to the high voltage cascade and the input transformer the rear grille must be removed. To do this, first switch off the mains voltage of the loudspeaker and wait at least 2 hours for safety reasons. Afterwards you can remove the screws and have access to the rear part of the electrostat.

!!! I switched off the loudspeakers the day before !!!
This ensured that the foils were completely discharged.

The high voltage cascade is a four-stage Greinacher circuit with a total of 8 diodes. In this circuit the reverse voltage of the diodes used must be greater than twice the peak voltage of the transformer secondary voltage. My loudspeakers are of the newer design and so there are 8 high voltage diodes in the cascades – in contrast to the older design with 2 diodes in series, that is 16 diodes in total.

To remove the entire power supply unit, first remove the groundings of the front and rear grids. Afterwards the three cables for bass and treble bias voltage and the ground can be desoldered. Be careful with this because the wires are wrapped and you have to work very close to the dust protection foil. If the cables are separated you can loosen the screws and remove the power supply. 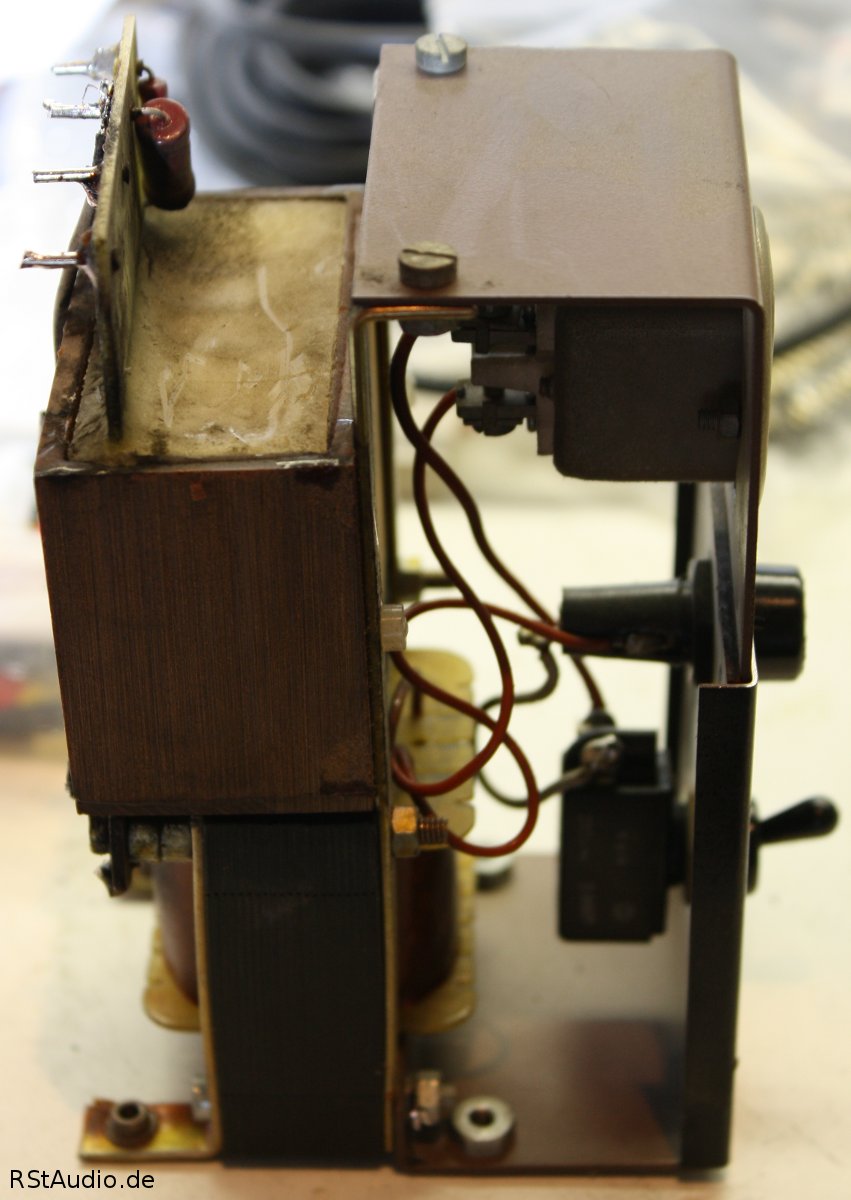 In order to finally remove the high voltage cascade, the two cables of the secondary voltage of the transformer have to be unsoldered from the input of the cascade. Then the two plastic screws can be removed and the cascade can be taken off. The last preparatory step before replacing the diodes is the melting of the wax with which the cascade is cast. This is done in a suitable vessel at approx. 150°C in the oven. 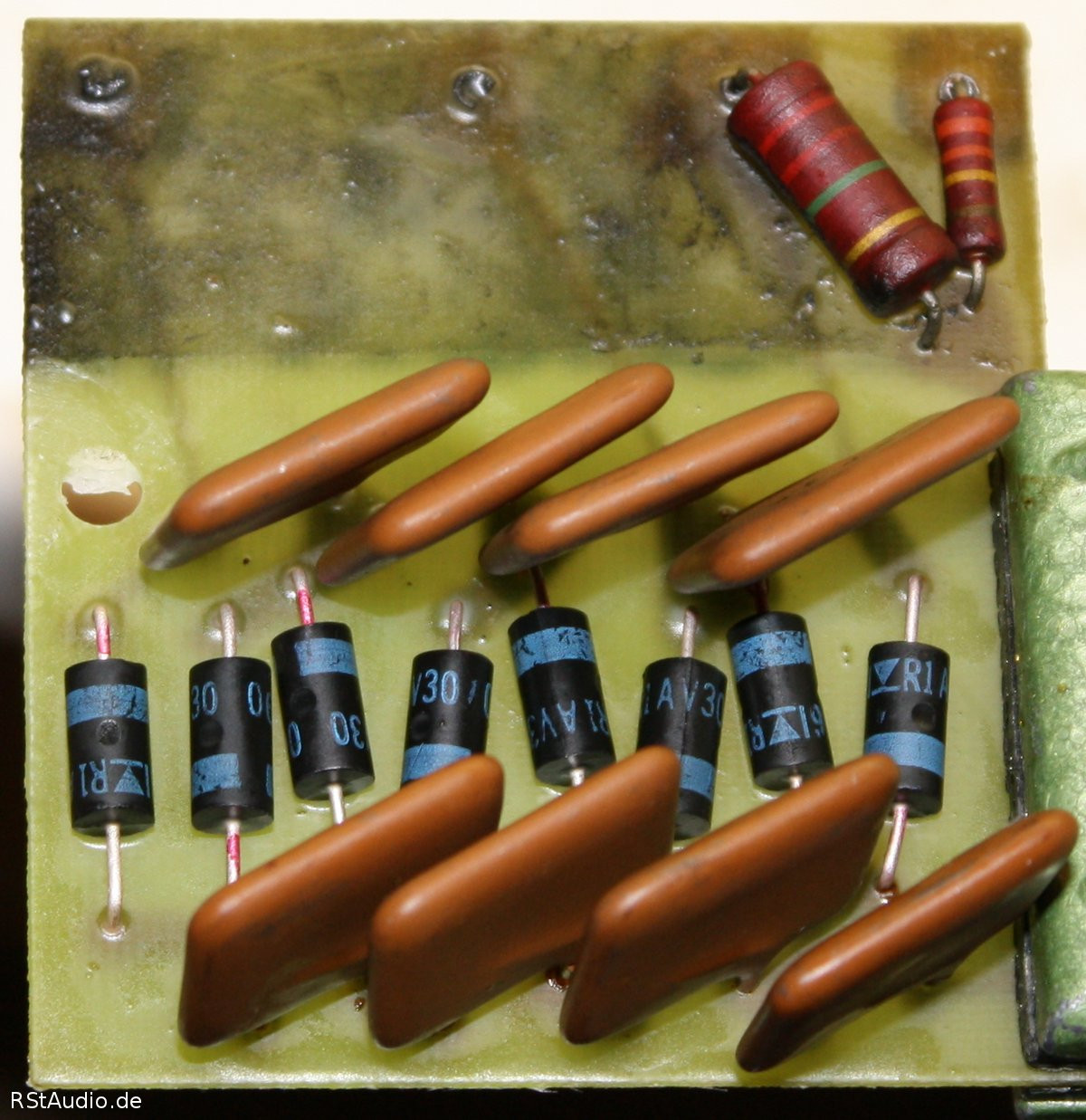 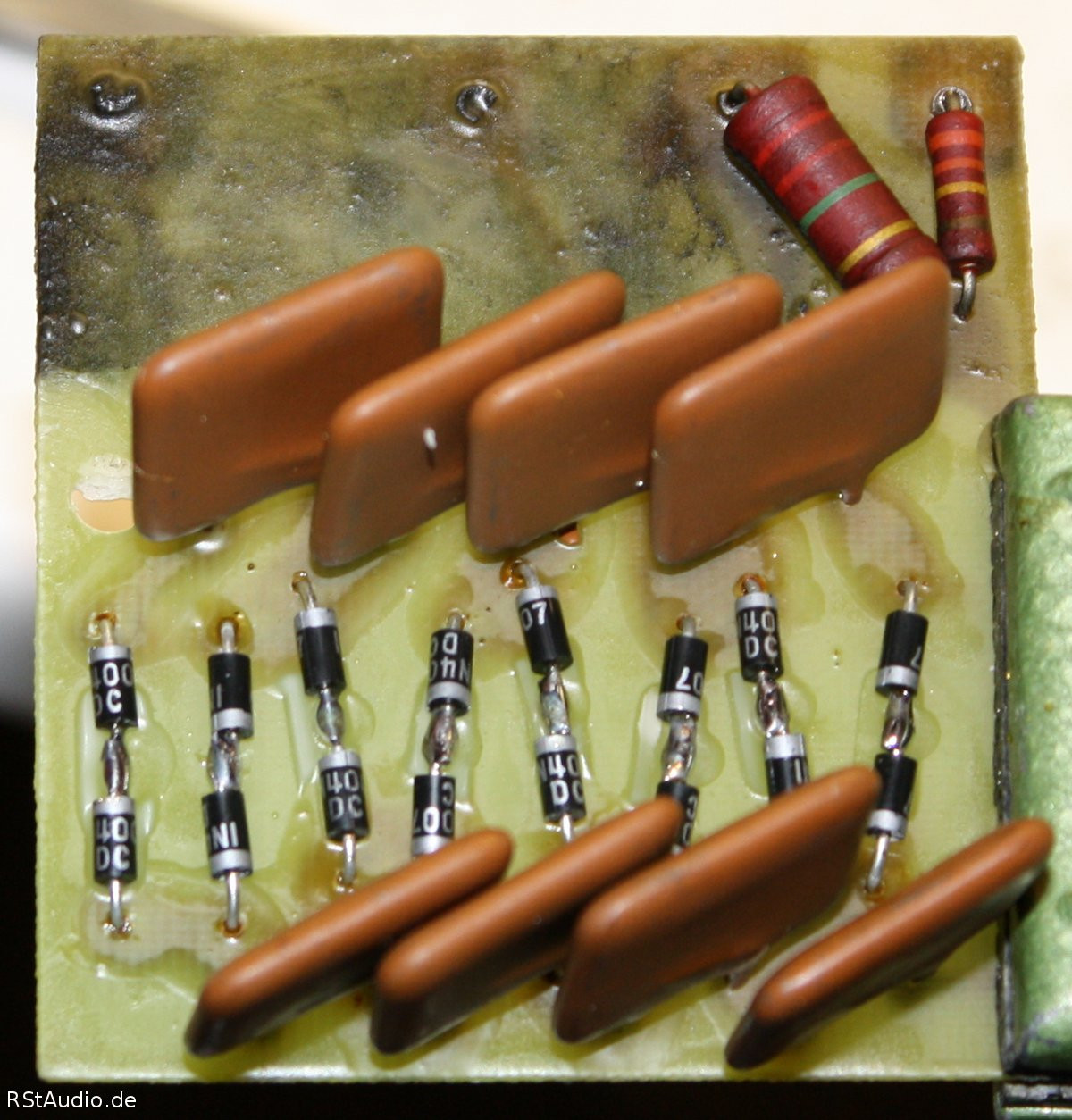 I replaced the single original diode of the high voltage cascade (left picture above) with 2 series-connected 1N4007 standard diodes (right picture above) to achieve a maximum reverse voltage of 2kV in each stage of the Villard circuit.

Now all the steps are repeated in reverse order, thus reinstalling the renewed cascade. Make sure that the screws for fixing the cascade are inserted in their holes before the hot wax is poured, as their thread is formed by the cooling wax.

I can only recommend this action to every owner of a Quad,
the speaker is then almost unrecognizable.

Since I had already unscrewed the back covers of all my electrostats anyway, I took the opportunity to make some small changes in the audio area. I was disturbed all these years by the very modest speaker terminals of the Quad which I replaced in this action. Furthermore I followed a suggestion on Sheldon’s World and installed a surge protection for the high frequency foil. 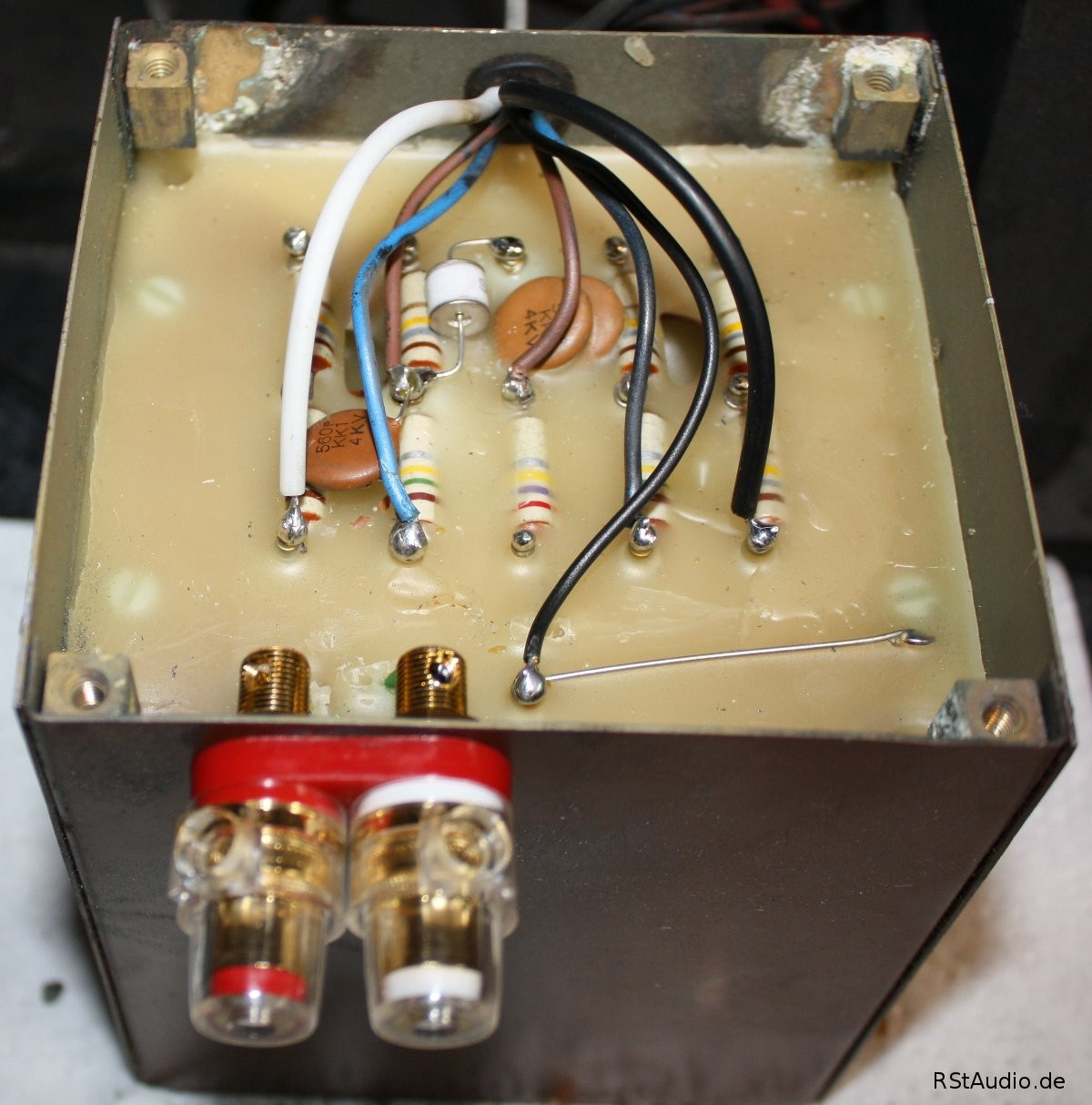 The picture above clearly shows the new speaker terminals. To install them I first had to drill and enlarge the existing holes. Also an adaptation of the rear grille to the larger sockets was necessary. Furthermore you can see the overvoltage protection at the transformer output to the tweeter foil. In contrast to the Zener diode chain used by Quad in later models, which is supposed to have a negative influence on the sound, the gas discharge path CP Clare CG3-1.5L with its extremely high resistance (GΩ) and very low capacitance (pF) is neutral in sound – of course only as long as it doesn’t ignite, but then the tweeter foil is also overdriven and there’s a danger that it strikes.