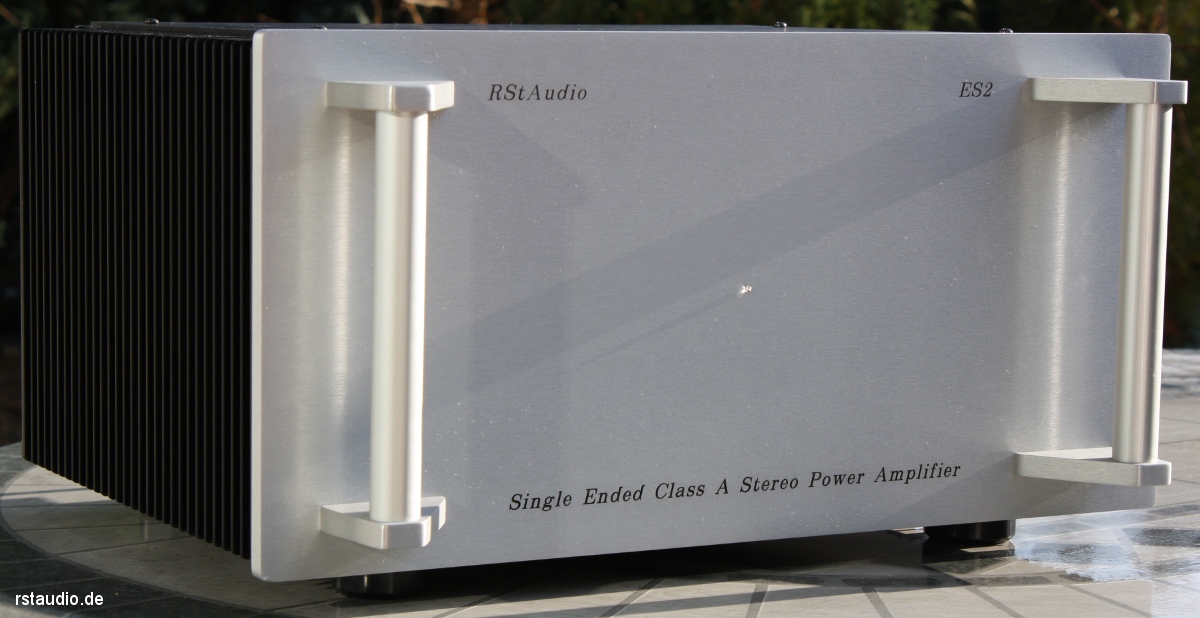 I have four 57th Quad ESL in a stacked configuration in use. They have a very hard to drive impedance and it’s not so easy to find an adequate power amplifier for them. The most important requirement for this amplifier is that it must be possible to short the output. An amplifier based on a concept with a current source like the Zen or the Aleph’s are ideal candidates to drive this loadspeakers. I use this speakers since a couple of years now with the small Zen’s, but what I miss all the time is more power and so I have the wish to build a new amplifier with a similar concept and more output power.

During the whole time I use the Zen Power Amplifier I have naturally observed the development around the DIY projects of Nelson Pass. After I had followed a discussion about building a clone of the Aleph J at the forum of the AAA and I read about the first positive results I decided mid of 2010 to build these amplifiers by myself.

First I want to mention that the design of this amplifier is mainly based on the following patent from Nelson Pass, which describes the Aleph current source.

Nelson Pass itself characterize the amplifier in the manual as follows:

Meanwhile, it’s been about 13 years since I designed the Aleph 3, and I have such affection for that series that I revisited the design.

The Aleph J has about 15dB less negative feedback than the original and achieves comparable distortion, bandwidth and damping figures. It also has about 15dB less noise. Those of you with delicate tube preamps will be happy to see a 242kΩ input impedance with vanishing capacitance.

I consider it the best of the Aleph series.

The Aleph J carries on in the tradition of the Pass Labs Aleph series, combining those elements that were particularly right about the Aleph 3 and 30, and re-thinking those areas open to improvement. Unlike its First Watt predecessors the F1 and F2, the Aleph J is a voltage source amplifier – a regular sort of amplifier like the ones you already know and love.

There are differences between the Aleph J and its predecessors:

Some things have remained the same – the Aleph J has the same basic 2-stage topology and uses output MOSFETs operating in single-ended Class A mode. It’s distortion is still 2nd harmonic, and it’s sound is still natural and liquid. It is still very reliable. I don’t know of a load that can damage it.

The published technical datas for this amplifiers are:

I made some marginal changes compared to the original design. The current source for the input differential amplifier I made adjustable. Also the value of the output current sources are changable. With both I have the possibility to influence the operation points. The more important adjustment of both is the input current source, which influence directly the offset voltage of the amplifier output.

Because Nelson Pass didn’t published the schematic of this amplifier, I also don’t want to do that. If you are interested in the design I’m sure you will find enough informations at the Aleph Wiki Homepage, the Forum of the AAA or at diyAudio.com. You can also give me an email.

Commissioning of the Prototypes

The first Aleph J amplifier module I assembled on a heat sink from HI-FI 2000 (300mm × 210mm × 40mm) with 0,2K/W in it’s data sheet – in reality I have measured 0,3K/W. I used 2 adjustable automation power supplies to supply the amp. Both potentiometer on the amplifier module I set to the values of the original schematic first.

I don’t change the value of the potentiometer for the output current source – the current was in the expected range of 1.15A per current source at a voltage of around 570mV at the Source resistors. The deviation between the power MOSFET’s was below 10mV, so the matching of the transistors was very good – I bought them from an ebay shop. I don’t matched the Source resistors and used them unmeasured. The result shows that this is not necessary.

The current of the current source for the input differential amplifier I had to adjust. After the amplifier has reached his operation temperature I could adjust the output offset to around 0.7mV. I don’t check it over a longer time period, but during the time of measurements the value was stable after heating up.

Only with one running Aleph J amplifier I was able to hear that the exchange of the Zen amps will bring my audio equipment a big step forward. The differences are significant and therefore I waited very impatiently to the missing material to build up the second amplifier. 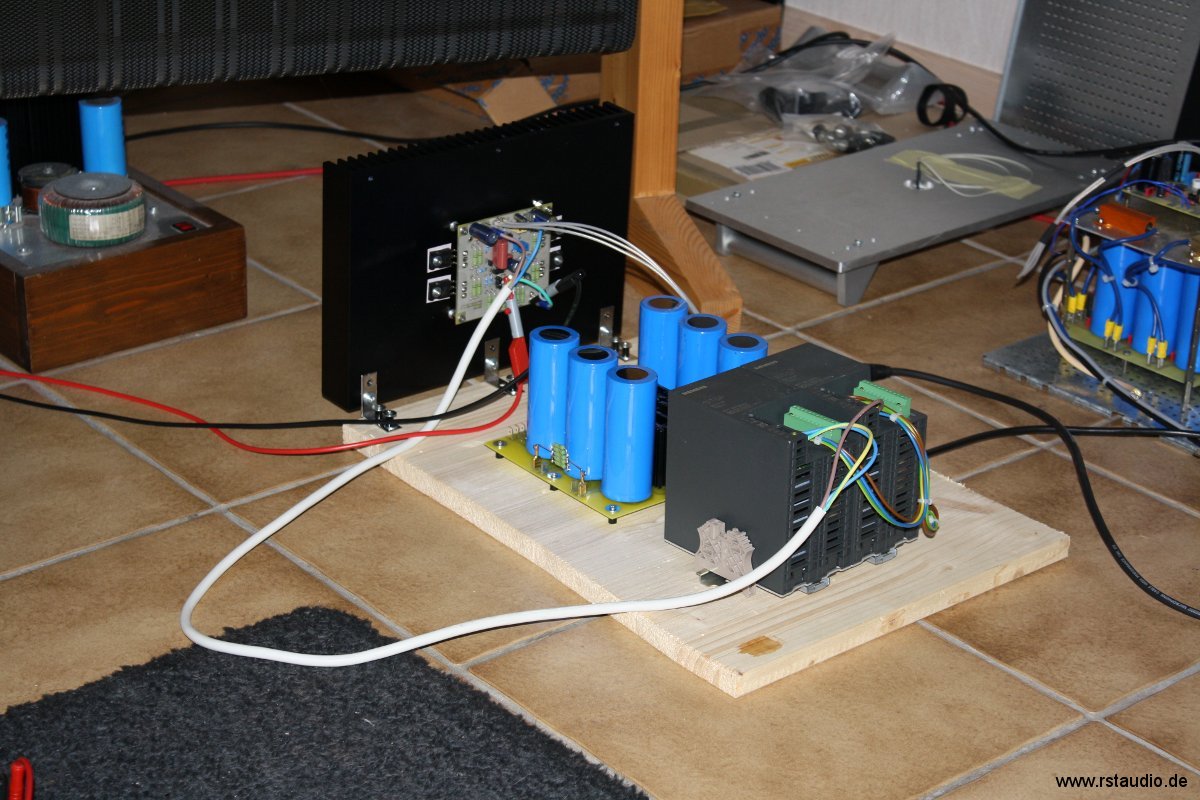 First Commissioning of one Channel of the Aleph J

In the meantime both amplifiers are running as prototypes. Both power supplies complies as far as possible to the final unregulated CRC filtering – 4× 47000µF and 2× 0,2Ω. The toroidal transformers are custom-made in the usually good quality from RONDO Ringkerntransformatoren of the Müller Elektrotechnik GmbH.

To the audiophile characteristics I can say that my expectations are more than fulfilled. The Aleph J is much better than the Zen amps and I can hear details from my vinyl’s or CD’s which I never heard before.

The Aleph J is a really big step forward for my audio equipment !!!

Assembly of the Aleph J

Some tests with my prototypes showed me that it is worth to drive every single loudspeaker in my stacked Quad system with an own Aleph J amplifier. As a consequence I need 4 power amplifiers and therefore I decided to build two stereo power amps – one for every channel.

Basis for the amps are Pesante Dissipante 5U cabinets from HI-FI 2000 with two of the above mentioned heat sinks (order no. 1NPDA05300B). It is fully made of aluminium with a silver colored 10mm thick front panel, a bottom plate without and a top plate with ventilation slots. 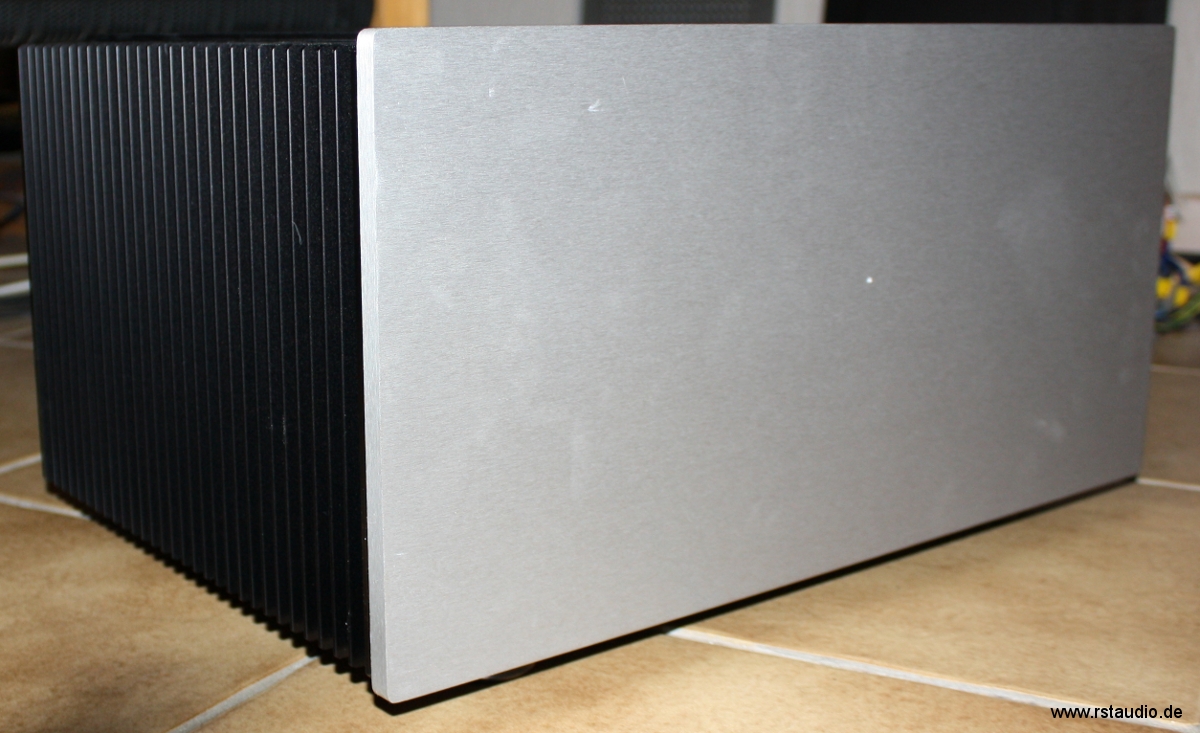 I hadn’t enough 2SJ109BL for 4 amplifier modules and therefore I made a redesign of the PCB to use a matched pair of 2SJ74BL instead for the input differential amplifier. In addition I left out the redundant adjustment of the output current source (see above). Furthermore I widen the PCB tracks for the power supply and the output signal.

Each amplifier module I assembled directly on a heat sink. Therefore I was able to solder the four power MOSFET’s direct into the PCB – without any cabeling – and I got a very short signal path. A thermal circuit breaker controls the heat sink temperature and switches off the 230V/AC supply if 75°C is exceeded. Furthermore I assembled an aluminium holder on both heat sinks to fix the mounting plate for the power supply. 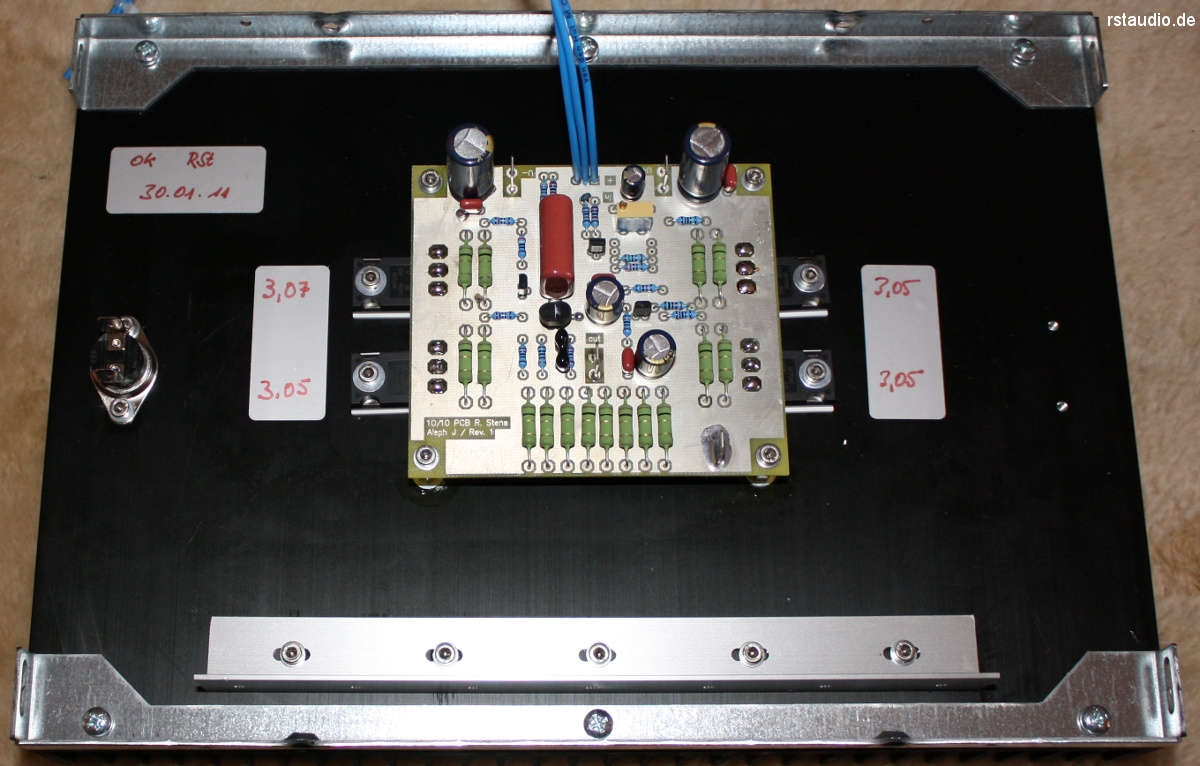 To use one stereo power amplifier for every channel the input signal for one channel must be conducted to both amplifier modules. The input resistance of the Aleph J is very high (see above) and therefore I got no problems with the parallel connection of the modules. However I wanted to be flexible enough to use the amplifier also in a two channel implementation. Therefore I use a switch at the rear to switch both inputs separately (Stereo) or in parallel Dual Mono).

Each output of both amplifier modules I connected with a muting device. With this circuit every output is shorted during the switch on and off to avoid hum. As a basis for the muting device I used the corresponding circuit of the original XOno. 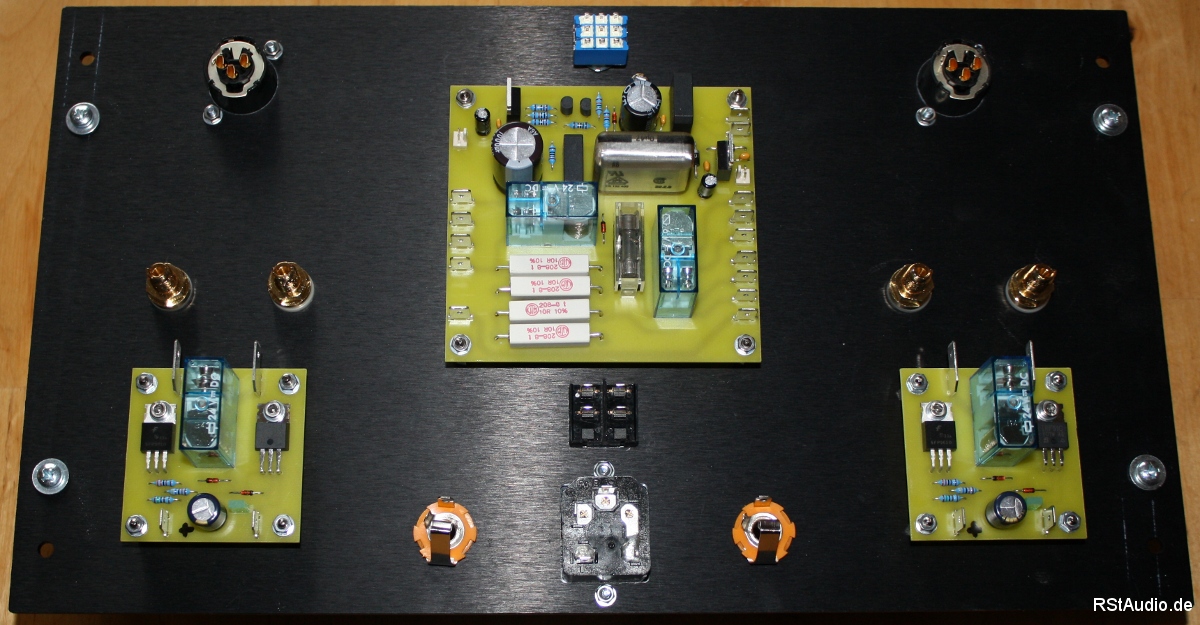 Rear Panel with Inputs and Outputs, Muting and Remote

My prototypes are absolutely silent (naturally only without an input signal), therefore I use an unregulated power supply. For a stereo power amplifier I use one toroidal transformer for both channels (400VA / 4× 19,5V/5A). This differs from my basic principles of a dual mono installation, but I save a lot of space in the enclosure and with the use of a stereo power amplifier for every channel I get again the separation of the power supplies for every channel. In front of the transformer I use 2× 22000µF/25V and a bridge rectifier for the DC filter in the 230V/AC supply.

After the common transformer for both channels the rest of the amplifier uses again a dual mono installation. For every channel I have 2 bridge rectifiers and a CRC filter with 4× 47000µF/40V electrolytic capacitors and 2× 0,22Ω/25W resistors in use. Both signal grounds (left / right channel) are each connected with a bridge rectifier with earth. 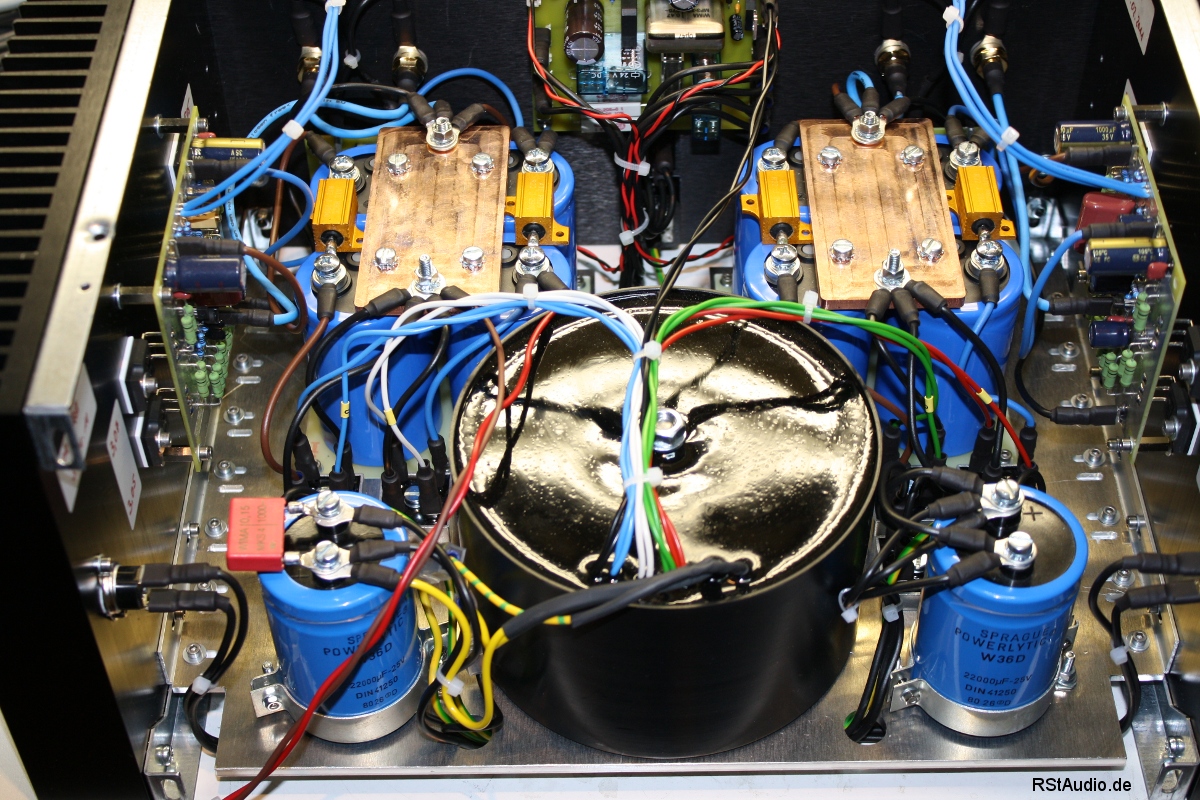 Finally a picture of the rear panel of the amplifier. 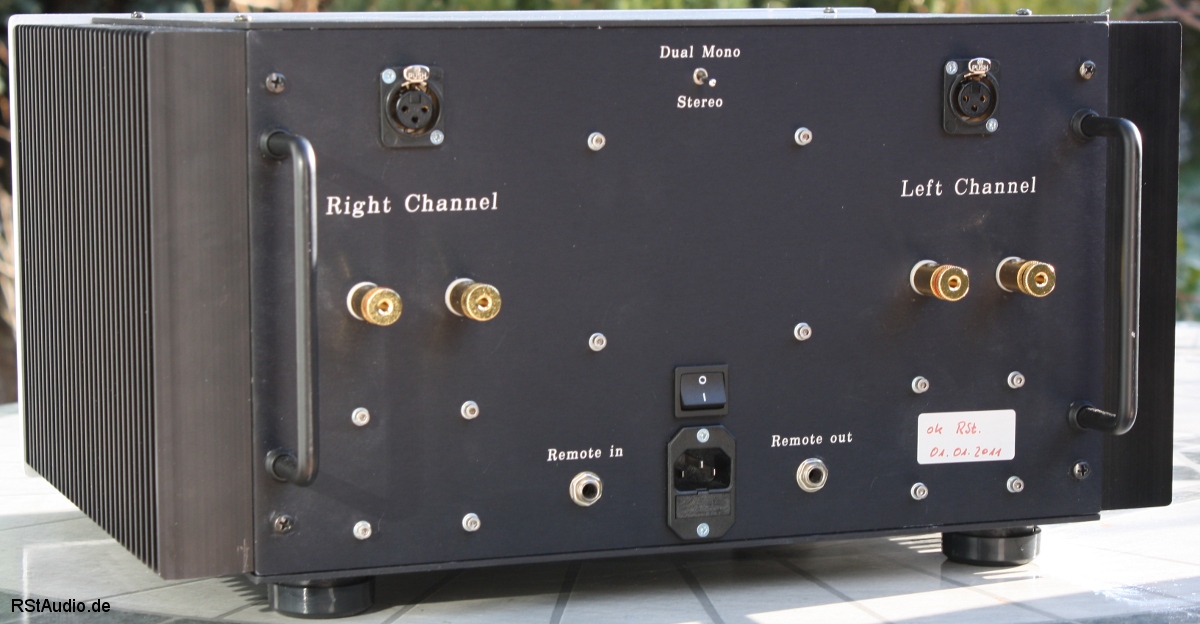 Back Side of the ES2