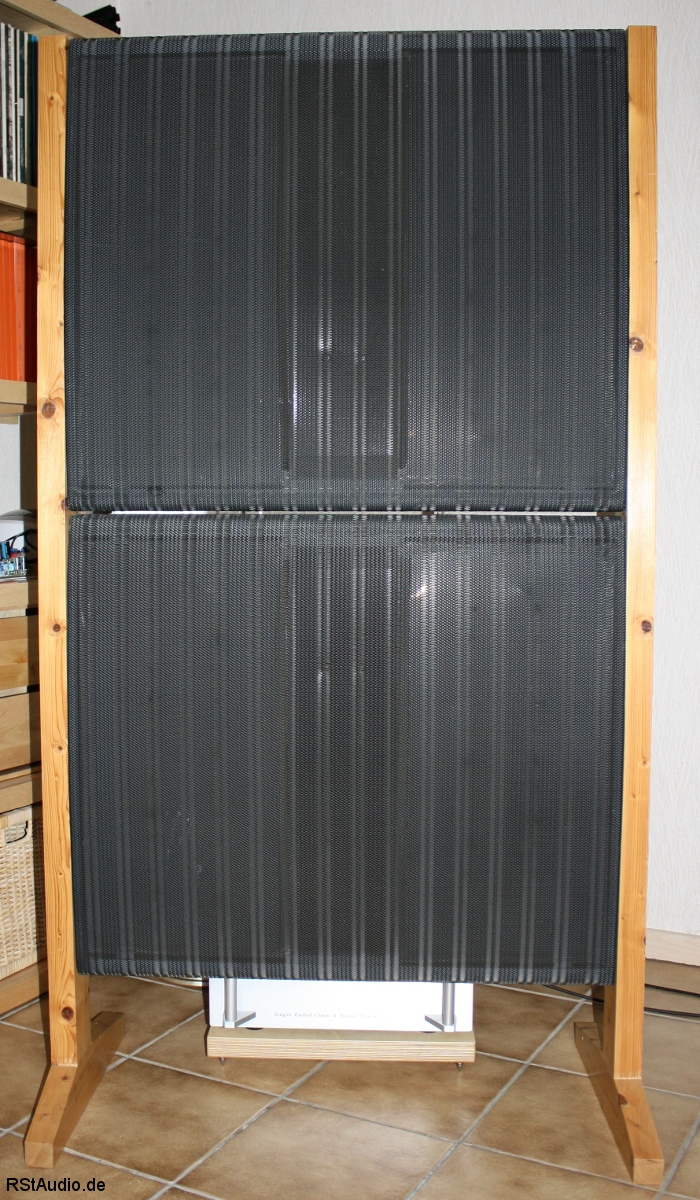 Since the late 1970s I have owned 57 Quad electrostats in a stacked configuration. In all these years I have heard many wonderful speakers, but never has there been a construction among them that could eventually become dangerous for my hot beloved electrostats. If you drive these speakers with the right power amps – and the XA30.8 is certainly one of them – then they are capable of amazing things.

Below is a statement by Peter Walker about Stacked Quads which I borrowed from the The Quad ESL homepage:

Another thing people like to do is to use two of our panels, one above the other. This is quite reasonable because it is really a strip source, you can extend the strip source without deteriorating anything. All you do is add 6dB at the bottom and 3 dB everywhere else. It gives you a louder sound, a more impressive sound. That’s all right. Adding woofers has never been very good. [Audio Amateur, 1978]

With the exception of the last sentence, I can only confirm these statements. The Quads do definitely benefit from a subwoofer support. It even helps them to not have to transmit the frequency range below approx. 100Hz. My crossover frequency is currently 127Hz.

For the correct dimensioning of the power amplifier you will find the following note in the operating manual of the 57 Quad:

AMPLIFIER REQUIREMENTS
Other amplifiers if they are properly regulated (not more than 33 peak volts with any load) are unlikely to cause damage to the loadspeaker, although they may not necessarily provide the correct performance because of the very strict stability requirements.

The maximum voltage per speaker should therefore not exceed 33Vp. Each loudspeaker is individually driven by one channel of a dual-mono ES4. So the single Quad has an amplifier power of about 100W at 8Ω available and the maximum voltage is about 44Vp. If you look at the impedance curve – see above – an output stage at about 13kHz must be able to drive a load of about 2Ω – very strict stability requirements. The XA30.5/.8 with its maximum output current of 20A is able to do this without any problems, it even drives two ESL’s connected in parallel without any problems – that’s how I operated the prototypes of this power amplifier in the beginning.

A good overview of the advantages of the stacked configuration can be found on the homepage The Quad ESL.

Construction of the Frames

A Stacked Quad consists of two 57 Quad electrostats per channel (see above) arranged in a frame one above the other. The lower speaker is installed upside down. The racks are self-built and based on various templates / projects from the Internet. 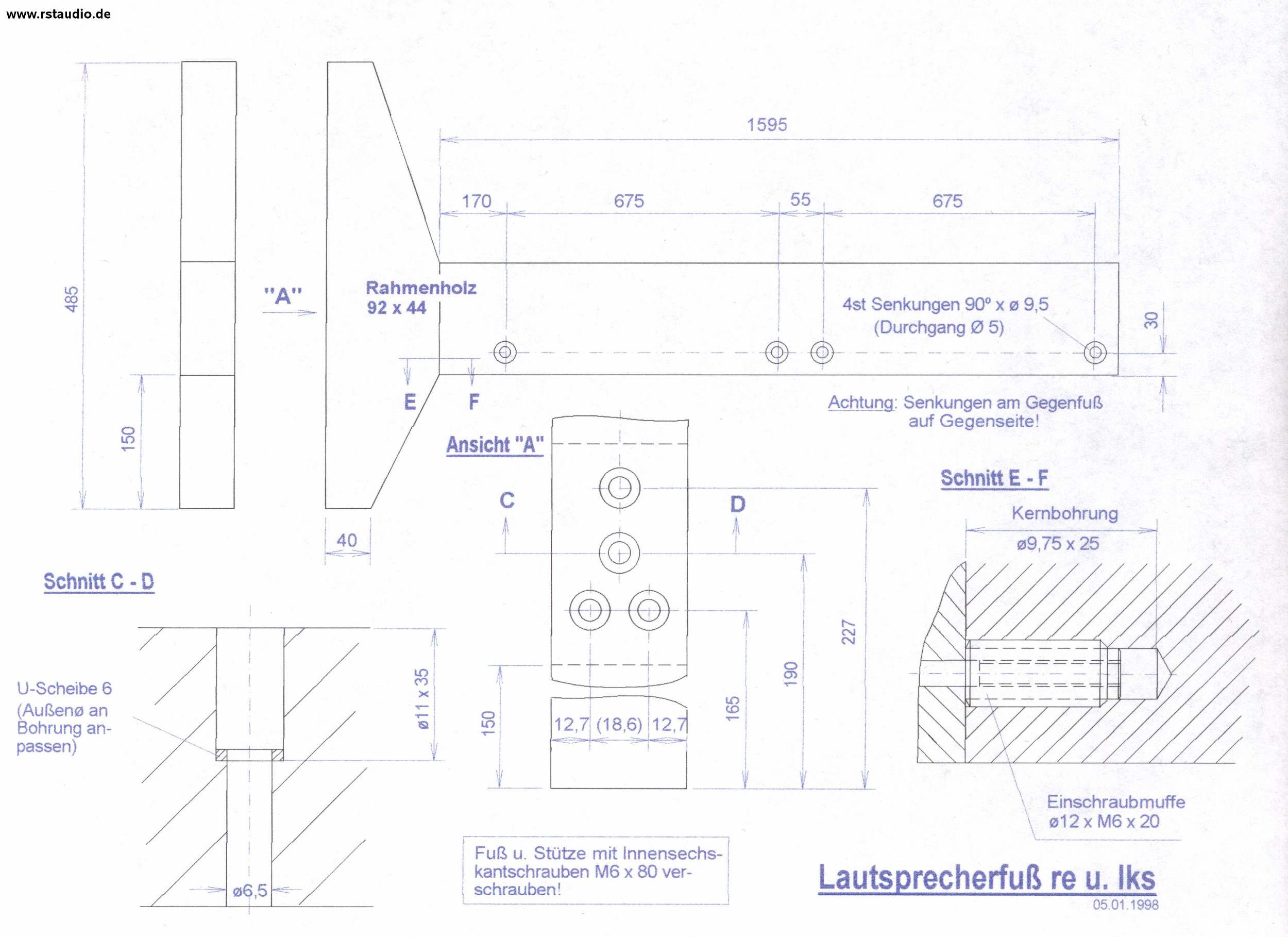 Construction Details of the Frames

The design and construction of these wonderful frames was done by my father.

Operation of the Stacked Quads

As I wrote above a Stacked Quad consists of 2 Quad ESL 57 per channel which are arranged in a rack one above the other. The lower speaker is mounted upside down to achieve a uniform curvature of both speakers.

There are three different ways to operate the speakers:

1. One Power Amplifier Channel with Speakers connected in Series
It is usually not a good idea to drive two speakers in series, the impedance is never really identical and so one speaker is supplied with more power than the other. Nevertheless it is a possibility to drive the Stacked Quad, especially since the very low impedance at about 13kHz has little effect. With the ES1 I used the Stacked Quads exactly in this way.

2. One Power Amplifier Channel with parallel connected Speakers
This is the correct connection when using one power amplifier channel. Now the two loudspeakers receive exactly the same signal and the tolerances in impedance do not have a significant effect. However, the impedance is particularly low at approx. 13kHz, the total impedance is half of the original when two identical impedances are connected in parallel. An output stage that can handle this must be able to drive very low impedances. This is one of the reasons why I don’t really consider a tube power amp for the Stacked Quads.

3. One Power Amplifier Channel per Speaker
In my opinion, this is the ideal way. I operate my Stacked Quads in exactly this mode. I take one stereo power amplifier per channel with both inputs connected in parallel and then connect one speaker to each power amplifier channel. But you need a power amplifier that can drive low impedances – the low impedance at about 13kHz remains, but does not have as much effect as under 2.

Over the years I have tried out a lot of power amplifiers on my Stacked Quads. There were also some very well known tube power amplifiers, but none could really convince me.

The power amps of Quad – e.g. the 303 or the 405 – work without problems, but are not really the audiophile optimum. I can’t understand the hype around the 303, you give away so much of the performance of the speakers with these amplifiers.

I still have vivid memories of the Mark Levinson ML2 from days gone by who did a wonderful job, but at that time they were in unattainable regions in terms of budget. The Stacked Quad was operated at that time with one ML2 per channel, whether in the variant 1 or 2, I can not say more today.

The first time I was really happy with a power amp at the Stacked Quads was with the Firstwatt Aleph J replicas. But only in the variant 3. One channel of this power amplifier is a bit overloaded with a parallel connection of 2 Quads. This 25W single-ended Class A power amplifier is certainly a best-buy. Unfortunately it is not a supersymmetrical bridged circuit. A correspondingly designed version of the Aleph J – thus an Aleph JX – would certainly be a further improvement.

It became really good with the replicas of the Pass Labs XA30.5/.8 which seems to be made for these speakers. They are able to drive a parallel connection. However, I also prefer the variant 3 with this power amplifier – already because of my very positive experiences with this variant with the Aleph J. With these power amps and the revised Stacked Quads you are very far ahead!