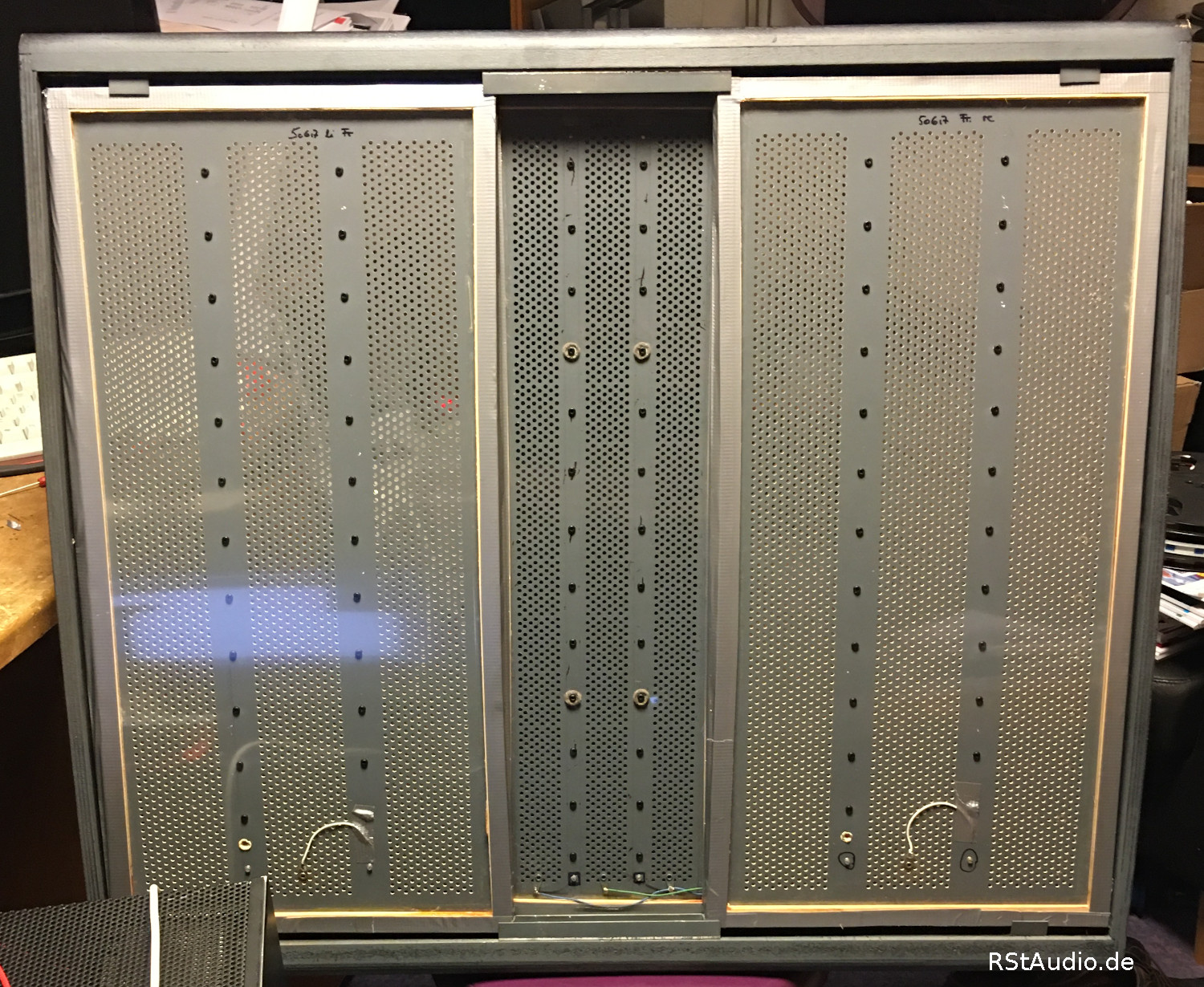 Since a few years it was clear for me that the time for a complete refurbishment of the Quads has come. My friend Meinolf had already worked on 3 pairs in this time with very large success and the results were really stunning. I have always done myself however very heavily to finally begin with it – it is simply no work which I really like. After Meinolf had finished his third pair at the end of 2019 and he optimized the processing steps again, he took mercy on me and began in early 2020 with the refurbishment of my Quads.

Dear Meinolf, many many thanks again at this point for your excellent work!

Meinolf kindly provided me with his last refurbished pair and so I was able to listen to them during the whole time of working with Stacked Quads. Remarkable was the significant improvement of the audiophile performance – how would it sound with completely redesigned Quads?

The material for the refurbishment comes mainly from ER Audio from Australia. In our opinion Rob Mackinlay does by far the best work.

But not only the foils but also the high voltage generation should be replaced. Here I was naturally in my element again. First I looked around on the internet and had to find out that most of them didn’t really care about the functional safety of their boards – and that at voltages of around 6000V/DC. So I created my own circuit board – which I would have done anyway – and I added some improvements to the design (see Quad EHT Unit). The above mentioned Quads of my friend Meinolf are already running with the design, the last pair also with the final layout.

There is a phenomenon in conjunction with my Quads that I have observed for many years but have only understood in the last few weeks. The loudspeakers have a “day form”, they are sometimes quieter than usual and I have to drive more level to hear the same perceived volume. For a long time I considered it to be my personal daily condition, but the investigations of the last weeks showed that it is the loudspeakers themselves. The reason is the varying mains voltage ( allowed: 230V/AC ±10%) which has a direct effect on the bias voltage of the foils. Different bias voltages cause changed deflections – and thus volume – of the Quads. To prevent this, the RStAudio ESL AC Voltage Regenerator is currently (January 2020) under development.

The Quad ESL 57 consists of 3 active electrostatic units, two bass elements left and right and a narrower mid-high element in the middle of the speaker. For all 3 units the active “audio” foil and the two dust protection foils should be replaced. All in all 9 foils per speaker. Of course, the active foil must also be made electrically conductive. In the following picture the 3 elements are nicely visible. You can also see very impressively how the loudspeaker looks from the inside after 40 years of operation. What you can’t see on the picture are the insufficient foil tensions. 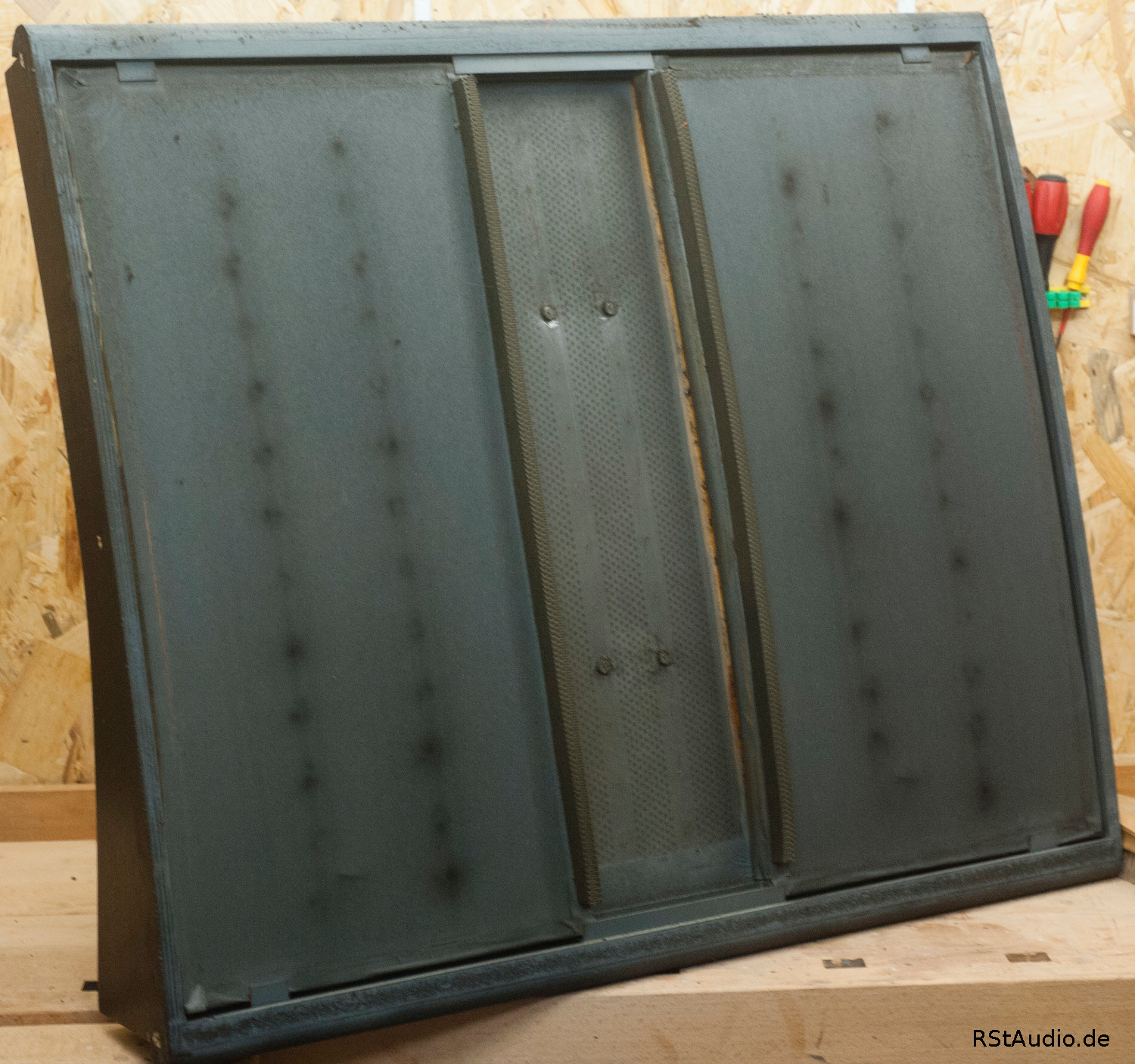 But it was not only insufficient film tension that was to be deplored. When we opened it, we found that all active foils were very “lovelessly” coated with the conductive film – there was no question of an even coating at all. In addition, there were damaged areas on the conductive coating of the stators, which definitely had already arisen during production. That sounds very negative now – which it certainly is – but the speakers always sounded good.

My friend Meinolf naturally repaired the damage to the active layer on the stators and of course he very carefully applied the conductive film to the entire surface of the foil. The new foils are now definitely driven over the complete surface.

In addition, however, developments have not stood still in the field of foils either, and today’s foils are much thinner and therefore lighter, but still more resistant than in the 1950s. This applies to all foils, of course. In the high frequencies there is now a 3.5μm Mylar C (original 6μm Mylar) and in the bass a 6μm Hostaphan (original 12μm Saran) foil. The very light dust protection foil has 3,8μm.

Who would like to read more exactly to the restoration of my Quads looks at the reports on the homepage of my friend Meinolf – not all pages are currently translated into English:

On his site you will find much more information about the restoration of the 57 Quad ESL – and a lot more!

However, you cannot hide a problem:

The Quads were developed in a time when the mains voltage was 220V/AC. Today it is 10V/AC higher and may fluctuate around ±10%. Rob Mackinlay from ER Audio has already pointed out in his manual for the ESL Repair Kit, due to the increased conductivity of the improved fluid, sparkovers can occur especially in the high frequency unit. According to him, however, it will get better as soon as it is completely dry. The loudspeakers will not be damaged, since the foils do not hit the stators.

That’s the way my quads behaved too. The few sparkovers decreased fast clearly and were after short time completely disappeared – so I thought at least. My friend Meinolf had already rewired the transformers of the EHT Unit’s as a precaution on the output side to the 590V/AC instead of the 610V/AC. So everything should be in best order.

But it came as it should have come. End of April 2020 we had strong wind and very sunny weather. I live in the country and our house is surrounded by photovoltaic systems and wind turbines. The grid voltage increased to 239V/AC during the day. One of the four Quads reacted to this with permanent sparkovers, I had to switch it off.

The solution to this problem is once again the RStAudio ESL AC Voltage Regenerator. I am currently (end of April 2020) not yet completely satisfied with my solution, but basically the electronics already work and so I connected the 4 Quads to 2 units and set the output voltages to 220V/AC. Also currently we have a grid voltage above 235V/AC, but my Quads don’t care about that anymore.

2020/02/10
It is of course much too early to give a final rating. At the moment I run the Stacked Quads with 4 revised speakers (2 own and 2 from my friend Meinolf). What I can say today is that the loudspeaker still has the distinctive genes of the 57 Quad ESL, but it has never sounded as good as it does today. The new foils definitely bring the Quads a huge step forward.

2020/04/26
Now that the 4 refurbished Quads have become sufficiently settled, I think it is time to make a final judgement. As I have already written, I have owned the Stacked Quads for more than 40 years and my ears have of course got used to their way of reproduction. I’ve heard all sorts of very well reputed speakers in that time, but what’s going on in my listening room right now is just unbelievable. I have never heard such roominess, transparency and resolution from a loudspeaker before. With the refurbished Stacked Quads I’ve arrived very far in front and you have to make an enormous effort to catch up. My friend Meinolf did a fantastic job!